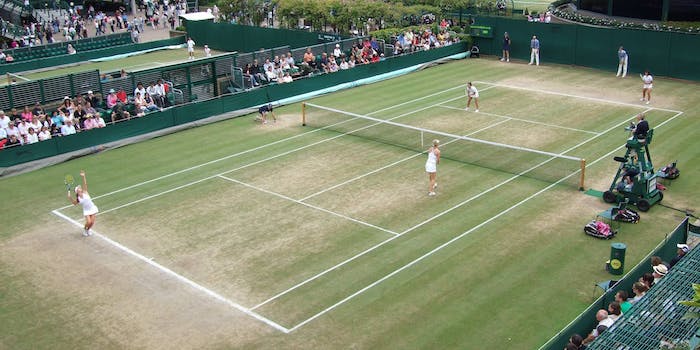 Twitter is testing its sports coverage by streaming Wimbledon

Sports fans are getting their first glimpse of what watching games live on Twitter might look like in the future; the social network is broadcasting footage from Wimbledon Grand Slam championship tennis tournament to test out its live streaming capabilities.

The footage didn’t include any live matches—ESPN holds the exclusive streaming rights to that content—but did give viewers a chance to catch the ancillary coverage around the main event with interviews, analysis, and match replays.

More importantly than the coverage itself is what it represents: the first look at what live entertainment hosted on Twitter will look like. Later this year Twitter will begin broadcasting NFL games, streaming 10 Thursday night games during the 2016 season.

The details of what that experience would be like have been sparse, but fans who plan to get their fix from the social network during the season can find the framework of it in the Wimbledon stream.

The presentation is rather barebones at the moment, with the video pinned to the top of the page and a scrollable feed of tweets located below or to the side of it. The feed updates like the standard Twitter feed, but with tweets specifically related to the event a la clicking a hashtag or Twitter Moments.

“Twitter is increasingly a place where people can find live streaming video, and that includes exciting sporting events like Wimbledon,” a spokesperson for Twitter told the Daily Dot. “This livestream of Live @ Wimbledon is in partnership with the AELTC and its broadcasters, and is an extremely early and incomplete test experience, and we’ll be making lots of improvements before we launch it in its final form.”

Twitter will likely make a considerable amount of of changes and improvements to the live experience before the NFL streams start, but it makes sense the company would want to test out the infrastructure before it bore the full weight of NFL fans.