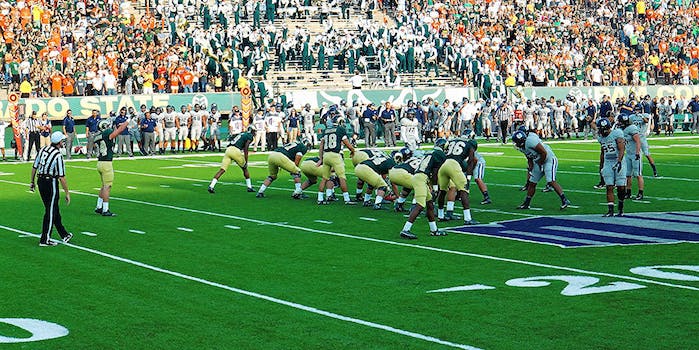 Are you ready from some live tweeting?

The countdown until the kickoff to football season is reaching an end. Thursday, September 1, 2016 will bring the first ever game to be livestreamed on Twitter, when Utah State takes on Weber State.

The matchup comes to Twitter thanks to a partnership with Campus Insiders, an online platform for college sports, agreed to earlier this year that will place over 300 live college events from the Mountain West Conference, Patriot League, and West Coast Conference on Twitter.

“It’ll be trending on Twitter. Is that the right word?” Utah State coach Matt Wells said during a press conference on Monday.

“Hopefully there’s no hiccups on that streaming,” Wells said, noting it would be the first college football game to be streamed on Twitter. “It gets to be shown I guess nationwide, right?” he asked to the room of reporters. “That’ll be a neat deal.”

Honored to be the first-ever live college football game on @twitter. #AggieUp https://t.co/YuvMhPSAlZ

We are thrilled to be part of the 1st ever college football game on Twitter. Catch it here: https://t.co/oK9UftRPQJ pic.twitter.com/FIqUmkxH2X

Neither game will be televised, but a spokesperson for Twitter told the Daily Dot the stream will be produced by Campus Insiders and broadcast by Twitter.

The company’s streaming platform has been put to use regularly in the last few months. Twitter has been broadcasting everything from tennis matches at Wimbledon to the Republican and Democratic national conventions.

The Thursday night showdown between the Division I schools will be an early test to Twitter’s plans to stream Thursday night NFL games. Earlier this year, the social network came to an agreement with the NFL to broadcast 10 regular season Thursday games.

The first professional game to be streamed on the platform will be the week two matchup on September 15, 2016 that will place the New York Jets in Buffalo to take on the Bills.