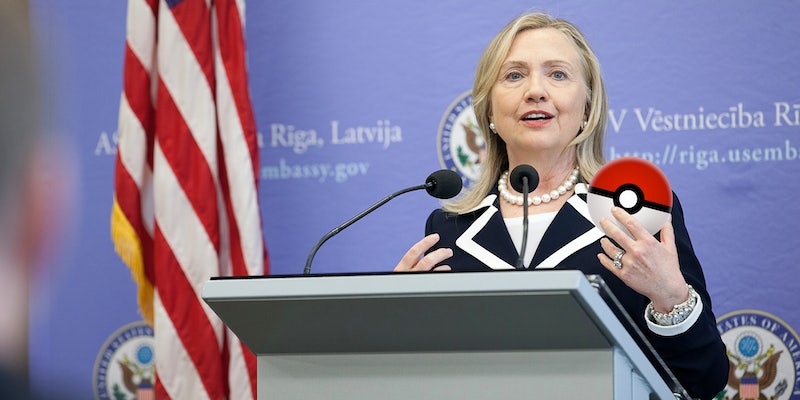 It was bound to happen eventually.

In an apparent effort to tap into America’s insatiable appetite for trapping tiny imaginary monsters, Hillary Clinton‘s team announced Thursday afternoon that it plans to hold a campaign event at a Pokémon Go gym and PokéStop on Saturday in Lakewood, Ohio. But Donald Trump didn’t wait long to hit back with his own PokéSlam.

The event, held at Lakewood’s Madison Park, promises attendees to “get free pokémon and battle each other while you register voters and learn more about Sec. Hillary Clinton!!!”

Clinton brought up Pokémon Go during a campaign event in Annandale, Virginia, on Thursday, telling reporters, “I don’t know who created Pokémon Go, but I’m trying to figure out how to get them to have Pokémon Go to the Polls.’”

Trump, the presumptive Republican nominee and Clinton’s most likely rival in the general election, quickly hit back at Clinton with a wacky Pokémon Go-themed attack ad deriding “Crookéd Hillary” as the ultimate pokémon catch.

For the eight of you who haven’t yet experience the augmented reality wonderment of the game, Pokémon Go requires players to walk around the real world until they find Pokémon, which pop up at random. The creatures then appear on your screen as if they are crouching right in front of you. The goal is to catch them with Pokéballs, level them up, and begin battling. You can also visit PokéStops and gyms, which are key virtual locations in the game that are often located at real-world landmarks.

Released in the U.S. on July 6, Pokémon Go has skyrocketed into popular culture. It is already the most popular mobile game in U.S. history, according to Survey Monkey, and it’s on track to have more daily active users than Twitter—if it hasn’t already surpassed it.

“I don’t know who created Pokémon Go, but I’m trying to figure out how to get them to have Pokémon Go to the Polls.’”

Clinton, on the other hand, has struggled to gain traction beyond her solid base of supporters. Following the U.S. Department of Justice’s decision to not charge her for mishandling classified material during her time as secretary of state—a move a majority of Americans oppose—Clinton’s lead over Trump has dwindled from 11 points down to just over three, according to Real Clear Politics’ national poll average.

Clinton’s embrace of Pokémon may not solve her dipping poll numbers—especially since interest in the game appears to have already begun to wane. She might be better off just picking up some NES Classic Editions and inviting America to challenge her at Excitebike. Unfortunately, that hot new Nintendo product doesn’t hit stores until three days after Election Day.