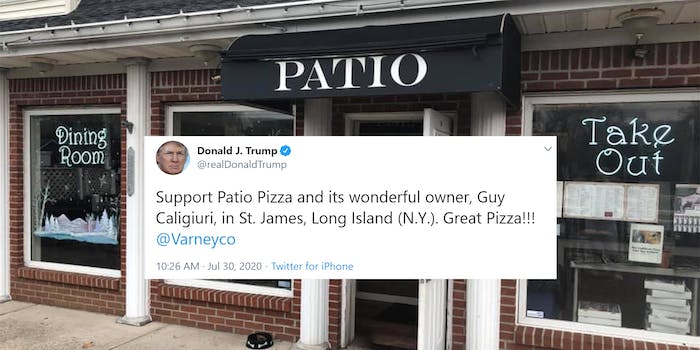 Did this Trump pizza tweet troll Herman Cain in death?

It left people baffled, to say the least.

It is no doubt an odd follow-up to his calls to delay the election, and there were two strains of thoughts. Some joked that Trump was trolling Herman Cain, the former CEO of Godfather’s Pizza and Republican candidate for president in 2012, by plugging another pizza company. Cain passed away from coronavirus this morning.

“Herman Cain’s final indignity is Trump hawking some other guy’s pizza on the day of his death,” wrote Brian Beutler.

But the other school of thought about it is much weirder. Because it could be completely read as red meat for the fans of QAnon, the conspiracy theory that President Donald Trump is waging a secret war against a cabal of Democratic pedophiles.

First off, there’s pizza, which was at the core of the Pizzagate conspiracy, which posited that Hillary Clinton’s campaign was running a secret sex trafficking ring out of a D.C. pizza parlor, of which the QAnon conspiracy grew from.

And then out of all the pizza places in the world, he picks one in St. James, Long Island. Although not one-to-one, Little St. James Island was owned by notorious deceased trafficker Jeffrey Epstein, a place visited by a number of luminaries.

And while that will set the message boards aflame, Trump did tag a Fox Business show, which most likely means that Stuart Varney was discussing the place on his show.

Unless Trump is admitting publicly the mass arrests are coming—as the absurd Q conspiracy foretold.