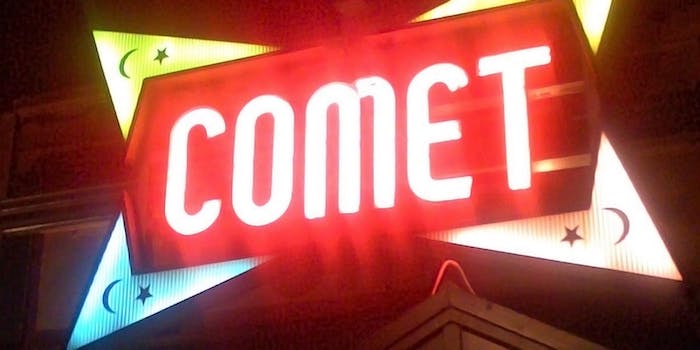 America’s Islamophobia and Turkey’s anti-Americanism has much to share in a post-truth world.

“PizzaGate” is more than an alt-right conspiracy theory for the Turkish people—it is a thoroughly covered satanism and pedophilia scandal that supposedly involves Hillary Clinton, Joe Biden and a pizza place.

In the last week, all Turkish pro-government papers, including mainstream publications like Sabah, A Haber, Yeni Şafak, Akşam and Star, ran similar stories about the PizzaGate, using the very same images and claims from a (now banned) subreddit to convince their readers on how serious and deep-rooted the scandal was. Columnists penned articles that the PizzaGate is a part of the globalist conspiracy against Turkey, and one article even remarked that the “Teenage” in pizza-eating Teenage Mutant Ninja Turtles now makes sense as a pedophilia reference after PizzaGate.

And all of this is very, very popular on Turkish Twitter. A video that claimed to show Comet Ping Pong pizzeria in Washington, D.C., purportedly delivering children to politicians and business people (which is not true) went viral in Turkey, just like the video of Vice President Biden on the swearing-in ceremony of Sen. Chris Coons (D-Del) was re-narrated in Turkey to claim that Biden was abusing Coons’ daughter in public (which, also, is not true).

There is even a bilingual Facebook page and a popular Twitter account (@pizza_gate) for the whole conspiracy, echoing the Biden stories run on the Turkish pro-government media.

After a pile of news stories on the PizzaGate conspiracy, Snopes featured a detailed debunk of the claims this week, alongside with the New York Times on November 21; Washington City Paper began reporting on it on Nov. 6 and again on Nov. 15, detailing the real-life consequences of the online conspiracy.

But the viral nature of conspiracies and fake news follow the same patterns among alt-right circles and Turkish pro-government troll network alike: In the Turkish case, the PizzaGate story appeared on Turkey’s Reddit-like forum/dictionary EkşiSözlük and on a self-claimed viral news network HaberSelf, where anyone can post content. Then, pro-government Twitter accounts spread it further, using the same anti-establishment rhetoric used by Trump supporters, even though Turkey’s mainstream media is almost entirely controlled by Turkish President Recep Tayyip Erdoğan’s establishment.

English translation: “The #PizzaGate case airs USA’s dirty laundry, we will keep this on our agenda. We cannot remain silent to this crime against humanity.”

Then it was picked up by pro-government columnists:

English translation: “The mainstream media did not grasp the significance of #pizzagate, neither in Turkey, nor in the United States. There, the administration is seized by pedophilia and blackmail.”

Following the Brexit and Trump campaigns, U.K.’s Oxford Dictionaries selected “post-truth” as the word of 2016, which is defined as “relating to or denoting circumstances in which objective facts are less influential in shaping public opinion than appeals to emotion and personal belief.”

The PizzaGate case is unique in the sense that it appeals not only to the white nationalists in the U.S. but also to the Islamist nationalists in Turkey, and the latter is the result of ‘decades old’ anti-Americanism in Turkey, crystallized after the July 15 coup attempt against Erdoğan sparked a flood of fake news, as the Daily Dot previously reported.

But new documents found in the leaked emails of Berat Albayrak, Turkey’s Energy Minister and Erdoğan’s son-in-law, suggest that the effect of recent disparagement of the United States has important consequences for domestic Turkish politics.

According to a confidential survey conducted by A&G Research for the governing party in August, about 90 percent of Turks believe that the United States is behind ISIS, the PKK—a Kurdish armed group fighting for autonomy in Southeast Turkey—and the Gülen Movement —a religious sect that the government blames for the coup.

The nationwide survey found that the 83 percent of Turkish people disagree with the U.S. being Turkey’s friend and ally, and 60 percent says their opinion about the U.S. will not change even if the administration extradites Fethullah Gülen, a powerful Turkish preacher blamed for the coup attempt, who lives in a self-imposed exiled in Pennsylvania.

While the results of this opinion research are rightfully concerning for the Turkey–U.S. relations, a more concerning part is in the survey report’s concluding remarks, which state that “the majority of Turks believe that the U.S. is behind the terror attacks in the country regardless of whichever group commits it.”

Such vilification allows Erdoğan to be saved from criticism regarding the country’s security failures, and it covers up other issues beneath sensational news. This is where the PizzaGate serves its purpose.

Timing of PizzaGate was significant in that it initially blurred the public debate abound the actual child abuse problem in Turkey. Back in March, when a real child abuse scandal was revealed at the government-linked Ensar Foundation, the perpetrator received a heavy jail sentence, but the government was spared from an investigation by a diluting the issue in the Parliament. This week, Erdogan’s party brought an even more controversial draft bill that would give amnesty to child abusers if they marry their victims.

In order to limit the civic opposition, the leading children’s rights NGO, Gündem Çocuk (“Agenda: Child”), was shut down by an emergency decree, together with women’s rights NGOs. And on social media, the rights defenders were accused of hypocrisy for remaining silent on the so-called PizzaGate scandal.

English translation: “Why are those scumbags who bullied Muslims for months by portraying the Ensar Foundation as child abusers now silent about this scandal in the United States?! #PizzaGate”

(Editor’s note: The author of this post was also targeted by the members of Turkish pro-government troll network for reporting in detail about how the government-linked companies and courts worked together to suppress news coverage on Ensar Foundation.

English translation: “Who was leading the smear campaign against ensar foundation by dozens of tweets, @efekerem, is silent about pizzagate. Are we surprised? No”)

While the most criticized amendment to the controversial bill has been withdrawn after wide public outcry and protests, the problem remains: In June, Turkey’s Supreme Court annulled the current legal protections for abused children and urged the Parliament to tolerate child brides. At a time when public debate and consensus is urgent for the best interest of the children in Turkey, Erdoğan’s party in power is using all of its online and offline tools to make sure that it will not take place.

Correction: An earlier version of this article incorrectly stated the location of Comet Ping Pong pizzeria. It is located in Washington, D.C.