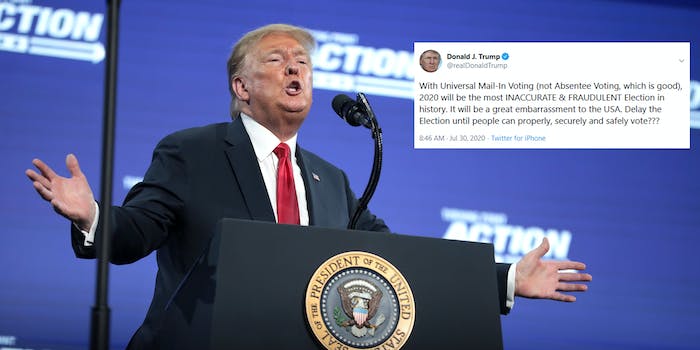 Trump doesn't have the authority to delay the election.

President Donald Trump on Thursday floated the idea of delaying the 2020 presidential election while continuing to criticize mail-in voting.

The president phrased his suggestion to delay the election as a question in a tweet on Thursday morning.

“With Universal Mail-In Voting (not Absentee Voting, which is good), 2020 will be the most INACCURATE & FRAUDULENT Election in history. It will be a great embarrassment to the USA. Delay the Election until people can properly, securely and safely vote???,” the president tweeted.

In some ways, it feels like Trump floating the idea of delaying the election was inevitable, as he has continuously criticized mail-in ballots and claimed that it would lead to a “fraudulent” election.

There is no evidence that increased mail-in ballots cast because of the coronavirus pandemic would lead to a fraudulent election.

Experts have said Trump’s claims of a “fraudulent” election were laying the groundwork for the president to dispute the results of the election if he was to lose to former Vice President Joe Biden, the Democrats’ presumptive nominee.

The president does not have unilateral authority to delay an election, and as Vox points out, Congress would need to change election laws to allow it to happen.

Congress is currently split ideologically, with Democrats controlling the House of Representatives and Republicans in the majority in the Senate.

While Trump may be claiming that mail-in ballots are the reason for his suggestion to delay the upcoming election, it may also have to do with the fact that he is trailing Biden in numerous polls.

But at a time where the president has shown a willingness to deploy federal agents throughout American cities, the combined prospect of him wanting to delay the election adds a frightening element to the discourse.