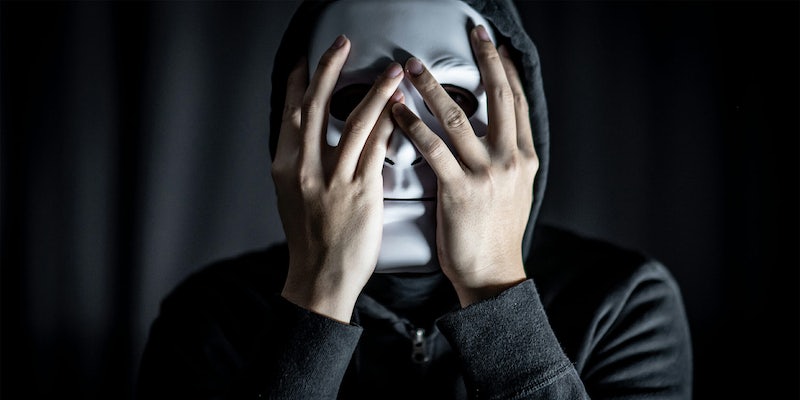 It really has been a whole year.

For a conspiracy theory that’s made it all the way to the White House, QAnon had an inauspicious start.

One year ago today, the post that introduced the world to the supposed anonymous Donald Trump insider who calls himself “Q” was just one out of thousands on the 4chan message board /pol/. It was indistinguishable from the rest of the noise, a torrent of racist rants and memes.

But something about this one particular post stood out. It was the first of well over 2,000 from the poster who soon went by “Q Clearance Patriot.”

With one year passing since the first Q post, it’s good to take a look back at how the QAnon phenomenon started and where it might go from here.

After all, as Q likes to say, “future proves past.”

Q’s post took it further—not only was Hillary’s arrest imminent, it was one of many about to come, carried out by Trump and the generals around him to cleanse the country of the deep state.

But that cleansing wasn’t going to be easy. Or quick.

The next few days brought a torrent of claims related to the upcoming arrests of pedophile rings, deep state saboteurs, celebrities, titans of industry, and top-level Democrats.

Q’s posts claimed that the military would be carrying out arrests and tribunals based on thousands of sealed indictments, that many arrestees were trying to flee the country, that the intelligence community was hopelessly compromised, that the National Guard was being called up to quell riots, and that the president would use Twitter to announce the great upheaval.

This great restructuring of the government and culture even got a nickname—Q referred to it as “The Storm,” echoing a cryptic remark President Trump made a few weeks earlier.

And it took off quickly among conspiracy theorists, with communities devoted to deciphering Q “drops” growing on 8chan, Twitter, YouTube, and Reddit. They made QAnon maps and clocks and research guides. Q merchandise even started hitting online store shelves.

This group became enthralled, in turn, by a cottage industry of Q “bakers” who picked over every word of every drop grew, making (very) minor celebrities of people who went by names like “Praying Medic” and “SerialBrain 2.” (Daily Dot reached out to several prominent QAnon believers, none of whom replied.)

POTUS: "You know what this is like? It's like the calm before the storm."
"What storm mister President?"
POTUS: "You'll find out." https://t.co/3dQzEDu1S2

Why did such a fantastical conspiracy theory, one that never presented any especially compelling proof of its existence, become so popular among the far right?

“Many Trump voters genuinely believed that a Trump presidency would result in the criminal prosecution of Hillary Clinton and people in her circle,” prominent QAnon researcher Travis View told the Daily Dot.

“[But] Trump quickly backtracked on ‘lock her up’ campaign promise, and Clinton is obviously not locked up. Donald Trump’s voters had to face the possibility that he was just another lying politician, and not, as he claimed on the campaign trail, a change from the ‘Washington elites.’”

As View puts it, QAnon offered an alternative explanation for the failure of the Swamp being drained: Trump was really working on destroying the cabal, but as part of a secret plan. “He’s doing it in a way that mainstream media isn’t acknowledging,” View said. “That narrative proved too tempting to resist for many.”

But, in a development that Q fans would have to get used to, the storm fizzled. None of the arrests or tribunals happened. No upheaval, no Storm, no nothing.

With the timeframe for the “arrests” having passed, Q quickly took up what became his familiar posting style—pumping out a series of rhetorical questions, riddles, context-free pictures, patriotic glurge, and random bits of text.

Q’s yarn grew to encompass everything from Big Pharma to Apple to The Godfather Part III, and rather than drive people away, it attracted more people—baby boomers and conspiracy theorists who found something they were looking for in the crazy quilt Q was sewing.

Q linked everything to everything else, flipping the deluge of daily news into a kind of conspiracy theory of everything—with a never-ending battle between good (Trump) and evil (the Deep State, the Clintons, Democrats) at the center.

The Las Vegas shooting? A Saudi-Clinton-Satanist sacrifice ritual. Robert Mueller, the Special Counsel investigating Russian meddling in the election? He’s actually working with Trump to root out pedophiles. The North Korean peace talks in Singapore? They happened months earlier, and the 2017 talks were just a show to root out potential assassins.

The first real non-conspiracy theorist attention that QAnon got was a Dec. 17 piece from New York Magazine’s Intelligencer site, where journalist Paris Martineau broke down the basics of what Q had already posted, debunked it, and marveled at what she referred to as a new Pizzagate getting any kind of traction.

(The Daily Dot covered the phenomenon a month earlier, when it originally went by another name, “Follow the White Rabbit.”)

Over the next months, it got more and more mainstream on the right. Sean Hannity shared Q-related Tweets. Roseanne Barr posted about it. Alex Jones declared he was personally in contact with Q. And even Time Magazine declared Q to be one of the most influential people on the internet.

Q, for his part, fueled the fire by pumping out even more cryptic and rhetorical nonsense—constantly alluding to how close the great wave of arrests, tribunals, and executions was.

No matter how many disappointments there were, and how many predicted times for “the Storm” passed, Patriots just needed to hang on, make memes, and keep praying.

It took almost a year for QAnon to finally, irrevocably break out into the mainstream, when at the end of July, Trump held a campaign rally in Tampa—and it was swamped by attendees in QAnon shirts, waving QAnon signs, and yelling QAnon slogans.

The mainstream media, which had mostly ignored QAnon as a crackpot conspiracy theory (with good reason) finally had to stand up and take notice. Almost every mainstream publication, from the New York Times to Politico to even Fox News, had to cover QAnon.

It seemed like the movement that had hidden in the swampy shadows of 8chan and conspiracy YouTube was about to go public —with no less than the president himself possibly mentioning it.

Intel posted by QAnon and picked over by “bakers” even made it onto mainstream sources—driven purely by Q believers on 8Chan.

That claim, View points out, “first popped up on 8chan on September 25. The very next day, TMZ repeated the false claim. Crowdsourced conspiracy theorizing means catchy misinformation can be churned out with industrial efficiency.”

As it turned out, “Katz” wasn’t Debra Katz, but Hillary Clinton’s longtime photographer. This was just one of many times that Q and the people who believe it turned out to be wrong.

Like the initial wave of arrests that were meant to make up the Storm, Q’s big stepping out into the mainstream fizzled out.

The media, liberal and conservative alike, even Fox News, ran screaming from QAnon. An NBC story seemed to finally unmask the poster behind Q, finding a group of three conspiracy theorists that claimed to make the initial posts and were cashing in off Q merchandise.

Reddit banned all of its Q-related threads for violent content, including one with over 70,000 members. Apple pulled down a QAnon app and deleted Q-related results from its Safari search engine. And many former supporters, such as Alex Jones, disavowed the conspiracy theory.

And when the moment of truth that so many Q believers had been waiting for finally came, and White House Press Secretary Sarah Sanders was directly asked about Q, she deflected the question and quickly moved on.

All the while, again and again, Q kicked the can down the road as to when “The Storm” would take place. It was always “soon” or “next week” or “close.” Even Q believers started getting frustrated with the lack of action.

With the anniversary approaching, Q signed off, maybe for good. His last post, on Oct. 9, was a “general update” that seemed to castigate his followers for being frustrated at the lack of action.

Even if the Q movement moves on from Q itself, the world Q dreamed up went from anonymous noise on an obscure message board to worldwide coverage in less than a year.

It would be foolish to count the movement, its followers, or its anonymous avatar down for good.