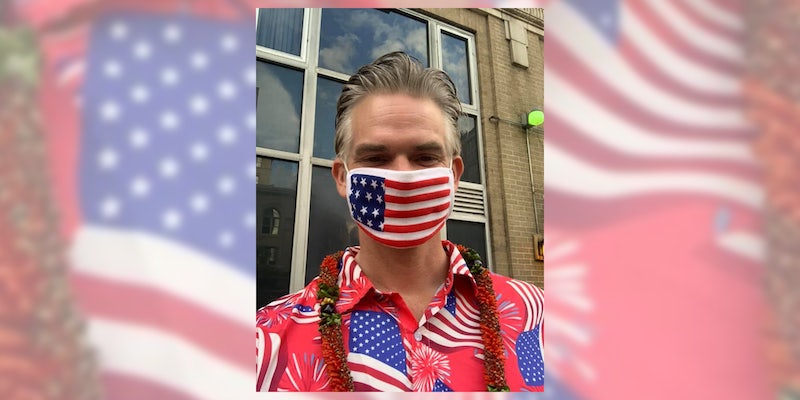 An official with the Hawaii Republican Party has resigned over a series of tweets praising QAnon, the conspiracy theory that the world is controlled by a cabal of satanic, pedophile cannibals that includes liberals, entertainers, and government insiders, and that former President Donald Trump was waging a secret war against them.

Over the weekend, Hawaii Republican Party’s verified Twitter account tweeted an eight-part thread arguing that QAnon followers—who were among the insurrectionists at the recent Capitol riots—might be misled, but at heart they’re just patriots.

“We should make it abundantly clear—the people who subscribed to the Q fiction, were largely motivated by a sincere and deep love for America,” read one of the since-deleted tweets from Jan. 23. “Patriotism and love of Country should never be ridiculed.”

The backlash was swift.

“So it’s the official position of the Hawaii GOP that executing Democrats is a viable belief that shouldn’t be ridiculed?” commented Andrew Kinsey.

Some of the Capitol insurrectionists reportedly planned mass executions of lawmakers, including House Speaker Nancy Pelosi (D-Calif.) and then-Vice President Mike Pence. They erected a gallows nearby for this purpose.

“What I noticed during much of the videos is a continuous appeal to emotion and a sense of identity as Patriots,” Boyette wrote. “I do believe many of the people who follow the Q-community love their country, I hope many of them closely examine what they can directly affect at a local and state level.”

On Sunday, Boyette again took to Facebook to complain about “left wingers on Twitter” having “fits” over the tweets complimenting QAnon.

The post solicited scores of comments, some arguing that Q is real and parroting its various theories, such as Trump having 17 flags behind him during his farewell speech as a sign he would be inaugurated on March 4. (‘Q’ is the 17th letter of the alphabet; QAnon adherents attribute all types of symbolism to it.) Others argued that the baseless conspiracy is harmful, dangerous and the opposite of patriotic.

“The Q conspiracy does deserve to be condemned. Hiding behind ‘love of country’ is NO excuse for propagating nonsense theories that are being used to justify violence,” said one man.

Shortly thereafter, Boyette announced he was resigning as vice chair of communications for the Hawaii GOP.

“The discussion of the Q-Conspiracy was an error of judgement, and should not reflect upon the leadership or the members of the Republican Party of Hawaii,” he wrote on Facebook. “The responsibility for that discussion and that error is mine and and mine alone.”

The Republican Party has grappled mightily with how to deal with QAnon. More than one GOP member of Congress has espoused the baseless conspiracy theory that sprang from Pizzagate.

Twitter users soon noted that, the same day it tweeted about QAnon, the party urged people to watch YouTuber Tarl Warwick because “his commentary and analysis is generally high quality.”

On his channel, Warwick, who goes by Styxenhammer666 and describes himself as an occultist, repeats various right-wing views that many deem extremist. He’s an adamant supporter of Kyle Rittenhouse. He has nice things to say about L. Lin Wood.

Some are also saying that he’s a Holocaust denier, a charge he denies.

In a video that circulated widely on Twitter, Warwick says of the Holocaust, “Whatever of the death toll was, you cannot say that every death was the result of execution.”

“The gas chamber at Auschwitz is actually a showering facility,” he later says. “…They’ve got like swimming pools at these places.

“I believe that there were death camps. Of course there were. However, what’s not clear is if this was a deliberate extermination effort on a grand scale or whether they were primarily focused on eliminating criminals and the sick.”

Warwick now denies it. On Monday, he claimed that the video was many years old and doesn’t represent his current views.