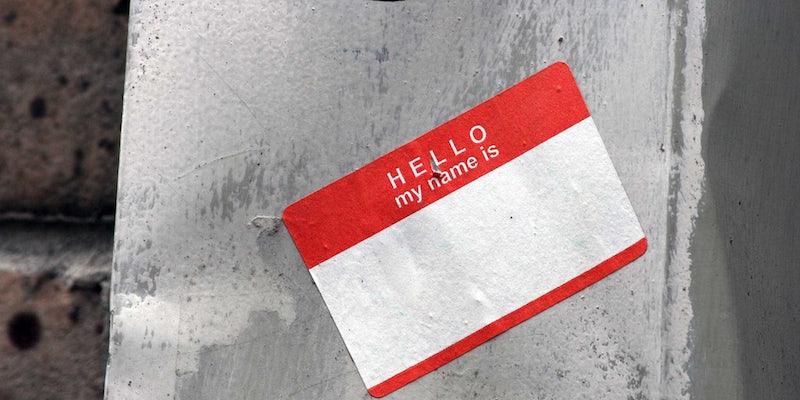 Google+ gives up and lets you use whatever name you want

Three years in, Google will finally relax its vice grip on a “real name” policy for Google+ users.

Google+ has always approached identity with a Facebook-like insistence on real names. As brands ran rampant on the Circle-ridden social network, not reined in by much of anything, regular Google+ users were warned against using anything other than their birth names (no hilarious parody accounts allowed here).

Google seemed to advocate, with a sort of desperation, for a shifting notion of true online identity that it never quite pinned down.

Of course, the news comes after the company collected three years worth of rich personal data neatly woven together across the Googleverse, all while strong-arming anyone who touched a Google product into signing up and connecting the data dots.

Google’s belated backpedaling isn’t altogether surprising. Earlier this year, the company lost Vic Gundotra, the iconic Googler who steered the Google+ project from day one. Also in stark contrast to the company’s social fever back in 2012, Google’s annual developer conference this year avoided any mention of Google+ altogether. Then just last month, Google downsized the role of Google+ profiles in its search results.

Google isn’t afraid to shift strategies when need be, but we can’t exactly say that it’s executing this one gracefully, even if we did finally get an apology:

When we launched Google+ over three years ago, we had a lot of restrictions on what name you could use on your profile. This helped create a community made up of real people, but it also excluded a number of people who wanted to be part of it without using their real names.

Over the years, as Google+ grew and its community became established, we steadily opened up this policy, from allowing +Page owners to use any name of their choosing to letting YouTube users bring their usernames into Google+. Today, we are taking the last step: there are no more restrictions on what name you can use.

We know you’ve been calling for this change for a while. We know that our names policy has been unclear, and this has led to some unnecessarily difficult experiences for some of our users. For this we apologize, and we hope that today’s change is a step toward making Google+ the welcoming and inclusive place that we want it to be. Thank you for expressing your opinions so passionately, and thanks for continuing to make Google+ the thoughtful community that it is.

Over the years, Google+’s draconian naming policy faced a few waves of criticism, but most folks weren’t engaging on the social network enough to care, even if they’d signed up. As a very early Google+ user with over half a million followers today, I can attest to the fact that the policy was arbitrary at best.

My 614,000-follower-strong account is not only verified, but it’s been promoted by Google’s official Google+ account a few times. The funny part? Google knows enough about me through services like Google Wallet to know that I use my mother’s maiden name, which I’m still in the process of legally adopting (it’s a long story) and that I’ve gone by my legal middle name (Taylor) since well before the day I started using my first Google products, like search and Gmail. Still, for anything other than filling out forms, my byline is my real name… and that’s always been good enough for Google+.

The question isn’t why Google should reverse its policy now, but rather why not? In 2014, Web-goers are entranced by the thin illusion of privacy served up by apps like Snapchat and the like. In the midst of an earnest if superficial privacy backlash resonant enough to capture mainstream attention, correlated personal data still trumps any nebulous notion of a “real” identity, no matter what we want to think.

We’re slowly waking up to the fact that all of this great free stuff we have isn’t quite so free in 2014 as it it felt even five years ago. Behind the scenes, social companies need nothing more than an identifying chunk of numbers to string our online behaviors together, one by one, into an endless, lucrative story. The best case scenario is selling that story—our story—to advertisers. Worst case scenario, it’s taken at proverbial gunpoint by shadowy government agencies. Unfortunately, unlike the names on some Google+ accounts, both scenarios are 100 percent real.