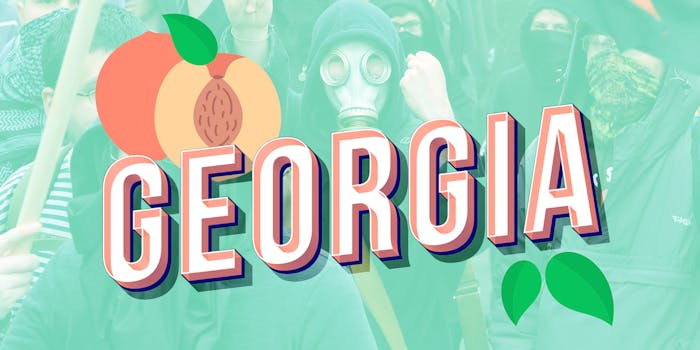 What comes to mind when you think of Georgia? The gnarled oaks and wispy Spanish moss of Savannah? The boisterous strip clubs of Atlanta? The humble peanut farms of our former President Jimmy Carter? Or black-clad, hammer-wielding super-soldiers policing a Marxist revolution in the streets of Marietta?

Probably not the last one because it’s not a thing. While there are hotbeds of “antifa” action in the U.S., most notably in West Coast cities like Seattle and Portland, Oregon, the American South is not one of them.

But that doesn’t stop Republicans from lying about that to scare voters. Former Navy SEAL Rep. Dan Crenshaw (R-Texas) recently filmed a jarringly cringe hype video for the Georgia Senate runoffs. In the video, he takes on a train of supposed antifa members walking harmlessly through a field that he says is somewhere in Georgia.

It would be one thing if Crenshaw decided to parachute into metro Atlanta, where he could ostensibly find an organized group of leftists that he could pretend were antifa and approach them there (it would be nonsense but at least justifiable nonsense). But that is not the message Republicans are trying to sell. They need rural Georgia voters to be scared antifa is present in their communities (which it isn’t).

And while Crenshaw has denounced Georgia’s QAnon congresswoman-elect Marjorie Taylor Greene, his message is synonymous with Greene’s. She filmed an ad holding a gun saying she was protecting her district in Georgia from antifa during her campaign.

Her district sits on the border of Georgia, Tennessee, and Alabama where in almost every county Greene represents, Trump won with over 80% of the votes.

Rome, Georgia, (population 36,000) is not the Pacific Northwest, no matter how Republicans try to paint it. But elsewhere in the state, Republicans are obsessed with antifa.

Last week, an unsourced report from Steve Bannon’s streaming show that went viral on Twitter said Georgia Republicans were only certifying the election for Biden because they were afraid that antifa would burn down Atlanta.

None of this is true, and it’s telling that the only winning message Republicans think they have right now in the Senate runoffs is an outright lie.