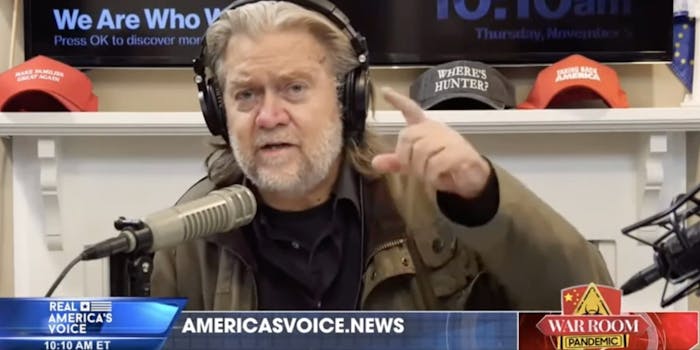 'I'd put their heads on pikes.'

The former chief strategist and senior counselor to President Donald Trump made the comments on his YouTube podcast, “War Room.” YouTube pulled the video and subsequently suspended the account.

In the clip in question, Bannon says he would put Fauci and Wray’s heads “on pikes” and put them on display at the White House. The comments came after he suggested Trump’s “second term” kick off with the firing of Fauci and Wray.

“Second term kicks off with firing Wray, firing Fauci, no, I actually want to go a step farther, but the president is a kind-hearted man and a good man,” Bannon said.

“I’d actually like to go back to the old times of Tudor England. I’d put their heads on pikes, right, I’d put them at the two corners of the White House as a warning to federal bureaucrats, you either get with the program or you’re gone,” he added.

The accounts were not available on either platform when the Daily Dot ran a search for them Thursday evening. CNN reports the Twitter suspension is permanent.