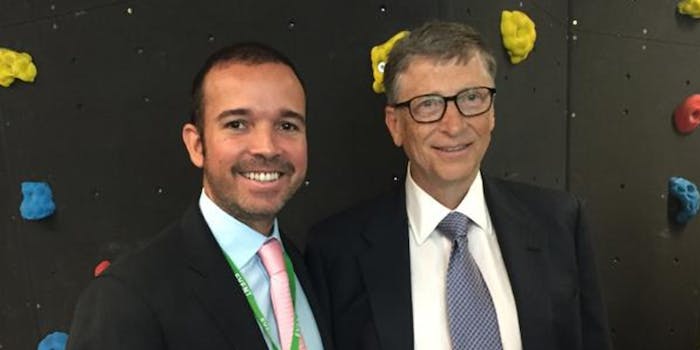 The billionaire once met an election technology company CEO.

Conspiracy theorists are tying billionaire Bill Gates to false allegations of widespread voter fraud after a picture from 2015 resurfaced online.

The picture, which shows the CEO of election technology company Smartmatic next to Gates, is being cited as evidence that the 2020 race was stolen from President Donald Trump.

Smartmatic is just one of numerous election-related companies, including Dominion Voting Systems and Scytl, that have found themselves at the center of countless conspiracies since Trump lost the election. Gates has also been a prominent figure among conspiracy theorists for years due mainly to his vocal support for vaccination.

But conspiracy theorists can’t seem to agree on what exactly the picture proves, although they all appear to agree that it is undeniably nefarious.

The tweet was also referenced by Angela Stanton King, a QAnon-supporting Republican from Georgia who recently lost her race for Congress.

“Everything always points back to this guy…” Stanton King tweeted.

Trump supporters implored their followers to share the 5-year-old photo but still failed to explain how exactly it proved that the election was stolen from the president.

“THIS right here is an interesting TWEET,” @MarissaNovetsky said. “Wouldn’t you say?”

The photo was even shared by Lin Wood, an attorney who has attempted to overturn the election results on behalf of Trump.

“Smartmatic was front & center in effort to steal 2020 election from @realDonaldTrump,” Wood tweeted. “Many of elite who seek to control us are close with Smartmatic. Anyone surprised by this photo? I am not.”

Wood also insinuated without evidence that Smartmatic’s CEO could be a pedophile by questioning whether he had flown on deceased sex offender Jeffrey Epstein’s private jet.

The picture’s resurgence comes as Trump refuses to publicly concede the election, although he has voiced support for the transition process to a Biden administration.

Neither Trump nor his allies have yet to show any credible evidence of widespread voter fraud linked to the 2020 election.