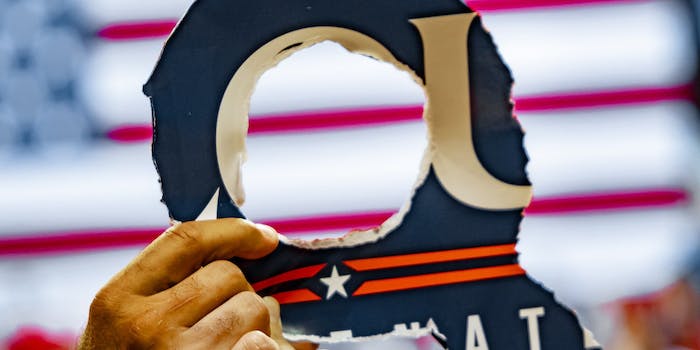 There was one major victory.

Twenty-seven candidates who have publicly expressed at least some support for the QAnon conspiracy theory—25 Republicans, one member of the Independent Party of Delaware, and one independent—secured a spot on the ballot in yesterday’s general election.

They almost entirely failed, a poor showing for the burgeoning movement. But they can tout at least one success.

Shiva Ayyadurai, Massachusetts: After losing the Republican Senate primary, the self-described “inventor of email” and QAnon supporter ran as a write-in candidate but received less than 1% in the general election.

Derrick Grayson, Georgia: Grayson is one of many candidates in Georgia’s Senate special election primary. He shared Q slogans in tweets touting a discussion with Ron Paul about the Federal Reserve and won roughly 1.1% of the vote, failing to advance to the runoff.

Jo Rae Perkins, Oregon: Perkins won slightly less than 50% in the GOP Oregon Senate primary, and has been a prolific promoter and supporter of Q. She’s claimed that Q is a military intelligence operation, compared belief in Q to belief in Jesus Christ, and over the summer, was one of a number of high-profile Republicans to “take the oath” to become a QAnon “digital soldier.” Running in a heavily Democratic state, she lost the general election 59%-38% to Sen. Jeff Merkley (D-Ore.).

Lauren Witzke, Delaware: After winning her insurgent candidacy in the Republican Senate primary, Witzke lost to stalwart Sen. Chris Coons (D-Del.) 59%-38%. Witzke had publicly endorsed Q a number of times, though she later retracted that support, claiming that Q was a “psyop” designed to make people trusting of a non-existent “plan” and that it was “more hype than substance.”

Joyce Bentley, Nevada 1st Congressional District: Bentley won her primary election in June and had shared the hugely popular QAnon video “The Plan to Save the World” in October 2018. She lost to incumbent Democrat Dina Titus.

Lauren Boebert, Colorado 3rd Congressional District: One of the most prolific Q-supporters running for Congress, Boebert has appeared on multiple hugely popular QAnon YouTube channels, only to claim since then that she “doesn’t follow” Q. On Wednesday, Boebert beat Democrat Diane Mitsch Bush to clinch the seat for Colorado’s 3rd Congressional District. She previously released a statement to supporters calling herself “Congresswoman-elect,” claiming, “The QAnon attacks were ridiculous. I have consistently said I am not a follower of and I do not believe in conspiracy theories.”

Mike Cargile, California 35th Congressional District: One of two candidates who ran in the blanket primary for his district, Cargile has tweeted numerous Q slogans and called Q “a perfect sentiment.” He lost to Democrat Norma Torres.

Erin Cruz, California 36th Congressional District: Cruz finished in the top two of her district’s primary and has expressed support for Q on numerous occasions, calling it “valid information … that’s in line with what’s coming out of the government.” She lost to Democrat Raul Ruiz.

Ron Curtis, Hawaii 1st Congressional District: Curtis won the primary in his district after tweeting and sharing a number of Q-related posts, including material from Vincent Fusca, a man many Q believers incorrectly think is actually John F. Kennedy Jr. The race hadn’t been called at press time.

Marjorie Taylor Green, Georgia 14th Congressional District: Greene might be the best known Q-aligned congressional candidate, drawing national media attention for her inflammatory videos and stalwart support of Q. After her Democratic opponent unexpectedly dropped out, Greene won her election to become the first QAnon-embracing member of the U.S. Congress.

Bob Lancia, Rhode Island 2nd Congressional District: Lancia is a former Rhode Island state legislator who easily won his primary election and has retweeted Q material, though he denied being an actual follower of the movement, claiming that his staff retweeted the posts because they supported President Trump. He lost to 11-term Rep. Jim Langevin (D-Fla.)

KW Miller, Florida 18th Congressional District: Miller got a measure of national attention for his candidacy with his bizarre theories about Beyoncé not actually being Black, as well as his vocal support of QAnon. Despite his media profile, Miller received around just 2% of the vote in his bid to unseat Republican Brian Mast.

Buzz Patterson, California 7th Congressional District: Patterson, who finished second in the blanket primary in his district, was asked on Twitter if he supported QAnon and replied, “Yep!” He later told Axios that he doesn’t remember sending the tweet and doesn’t actually support Q. At press time, Patterson trailed Democrat Ami Bera by about 2-to-1.

Nikka Piterman, California 13th Congressional District: Having finished second in his top-two primary in this heavily Democratic part of the San Francisco area, Piterman lost his general election by about 82 points. In 2019, he retweeted posts with the QAnon hashtag several times.

Billy Prempeh, New Jersey 9th Congressional District: Despite tweeting a photo of his presence at a QAnon rally and posing with a Q flag, Prempeh called his allegiance to Q “fake news.” Prempeh lost his general election bid.

Catherine Purcell, Delaware At-Large Congressional District: Purcell is running as a third-party candidate and has endorsed QAnon and the idea that global elites are harvesting children for the chemical compound adrenochrome. She received 1.5% of the vote.

Theresa Raborn, Illinois 2nd Congressional District: After running unopposed in the Republican primary, Raborn lost general election. She has publicly supported Q several times, including sharing the video of Michael Flynn taking the QAnon “oath,” which she said she shared only because it was “patriotic.”

Angela Stanton-King, Georgia 5th Congressional District: Another QAnon candidate who received national attention, Stanton-King ran unopposed in her primary and has shared a number of QAnon tweets and videos—only to claim that she did so only to “question the movement.” She lost her general election bid to Democrat Nikema Williams.

Antoine Tucker, New York’s 14th Congressional District: Tucker lost his write-in bid against Rep. Alexandria Ocasio-Cortez (D-N.Y.) and had expressed support for Q and its ideas on many occasions.

Daniel Wood, Arizona’s 3rd Congressional District: Wood ran unopposed for the Republican nomination in this heavily Democratic part of the state. Wood has tweeted Q posts and slogans many times and lost his bid in the general election by a 2-to-1 margin to Rep. Raul Grijalva (D-Ariz.0.