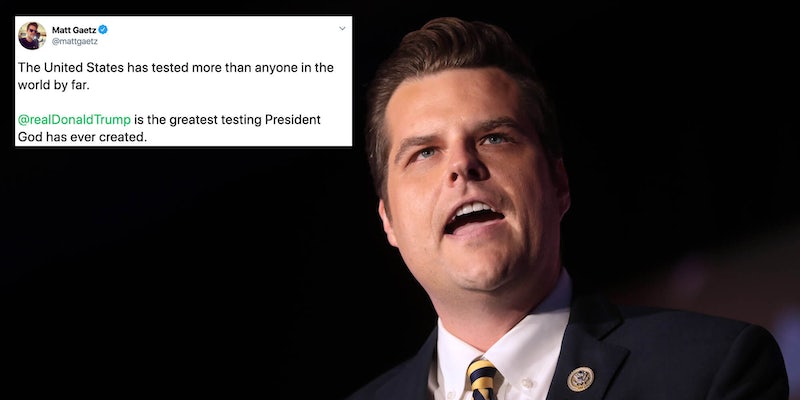 Rep. Matt Gaetz (R-Fla.) is being trolled on Twitter after praising President Donald Trump for his response to the coronavirus pandemic.

Gaetz asserted in a tweet on Friday regarding coronavirus testing that Trump “is the greatest testing President God has ever created.”

“The United States has tested more than anyone in the world by far,” Gaetz said. “@realDonaldTrump is the greatest testing President God has ever created.”

While accurate, the statement conveniently ignores the fact that the U.S. comes in at about 40th place in the world for testing per capita. The Trump administration has also repeatedly failed to meet its own testing goals.

Gaetz’s tweet, described by many as sycophantic, immediately received pushback given the politician’s previous attempts to make light of the virus.

But it was the congressman’s odd phrasing of “President God” that seemed to garner the most attention.

“Matt has the right to pray to any President God he choses. It’s America,” @bigmacher said. “God bless you Matt and your poor sentence structure.”

The hashtag #PresidentGod also began to spread, leading it to become a top trend on the social media site.

“At least they are finally admitting that they worship not Christ but Trump,” @jorymicah added. “Acceptance of the truth is the beginning of recovery from any cult.”

Some did agree with Gaetz about Trump and testing—at least that they felt they were being tested by Trump.

“Oh Trump’s a real ‘test’ for sure. Testing my patience. Testing my sanity. Testing my anger management,” @LacenUSA70 stated. “Testing my restraint from throwing a coffee table at my TV. He’s the greatest testing idiot in the world. Hands down.”

As of Saturday, more than 37,000 people have died due to COVID-19 across the country.

Despite the virus still not having hit its peak in the U.S., some beaches in Gaetz’s home state of Florida have begun to reopen.

Supporters of the president are even staging protests demanding that the shutdown end. GOP representatives are also debating a return to the nation’s capitol in protest of current social distancing guidelines.