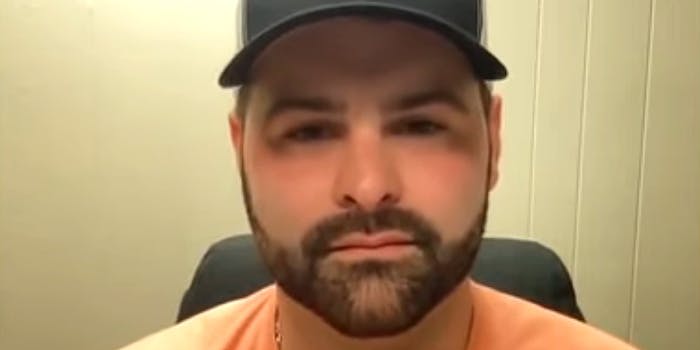 Far-right platform Gab is sponsoring white nationalist Nick Fuentes’ conference. The move has proved controversial for both parties. Many of Gab’s donors are claiming that they’ll no longer fund the platform.

“Everyone who will be going is a member of this website, promotes Christian values, openly proclaims the name of Jesus Christ, and promotes America First political objectives, candidates, and members of Congress,” Torba wrote on Gab.

Facebook and Google were last reported to sponsor CPAC in 2018. It’s not clear who Torba’s accusing of being “atheist libertarian billionaires,” though it’s possible he’s referring to Charles Koch. Koch is a billionaire, TPUSA sponsor, and has described his views as libertarian. In 2017, the Wall Street Journal reported that he’s not religious.

Gab is a notorious haven for the far-right. Antisemitism and racism are common. Torba often boasts that hateful ideas are welcome on his platform.

Torba’s embrace couldn’t come at a better time for Fuentes. The far-right figure who launched his public persona by claiming he was leaving college after being threatened for attending the Unite the Right rally has found himself increasingly unwelcome online. His recent permanent suspension from Gettr followed bans by more mainstream platforms where he’d built his audience.

The partnership is also arguably beneficial to Gab, which is struggling to compete in a crowded far-right social media landscape.

Gab sponsoring AFPAC follows its partnership with Fuentes’ streaming service. Alex Kaplan of Media Matters for America reported on Monday that Torba may even help Fuentes monetize it.

The move generated controversy for both parties, however. Fuentes’ posts about the partnership were riddled with comments trolling him.

Many pointed out that Fuentes has recently made scathing statements about Gab users, including calling them “fucking r*****ed.”

“You’ve openly degraded Gab and its users,” commented one. “Especially straights and women. Fuck off.”

Fuentes’ comments include a call for Gab to ban women from the platform.

Many of Torba’s followers also criticized him for embracing Fuentes, whose extremism proved a bridge too far for them.

“You are aligning Gab with a movement that wants to shut up the very people who helped your platform grow in the last year,” wrote one.

People who claimed to be among Gab’s sponsors said that they would stop donating if he persisted with plans to sponsor AFPAC.

“I didn’t agree to help fund AF,” wrote one. “I agreed to help fund Gab, but if this is where my money ends up, I am ending that agreement.” They added that “this is something that should have been discussed with the Gab community beforehand, as we are the main reason Gab has $20K to throw around.”

Torba’s critics included Islamophobic figure Laura Loomer. Loomer was outraged by Fuentes’ posting that he trusts Gab “because it’s run by a faithful Christian. And not some Judeo-Christian either, a Christian.”

On Tuesday, Loomer, who is Jewish, wrote multiple Telegram posts blasting Fuentes and Torba. She said that she’s long supported Gab, Torba, and even Fuentes, and noted that she attended and promoted AFPAC last year.

“The idea that you can’t trust someone who is Jewish is quite absurd,” Loomer wrote of Fuentes’ post about Christians versus Judeo-Christians. (Judeo-Christian is merely a term that notes that Christianity is derived from Judaism, as evidenced both by Jesus Christ being Jewish and its use of Jewish scripture in the Old Testament of the Christian Bible.)

In another post, Loomer wrote, “Does Andrew just want to create a terms of service that says ‘no Jews allowed’?”

“Am I not welcome simply because I’m Jewish, even though I have always supported Gab, I’ve been a friend to Andrew Torba and Nick, and I’m America First?” she added.

The criticisms grew loud enough that Torba weighed in. True to form, his stance was defiant.

“Controversy is attention. Attention is influence,” Torba posted on Tuesday amid the blowback.

“The point of marketing is to influence people to get off Big Tech and get on Gab. In order to do that I need their attention.”