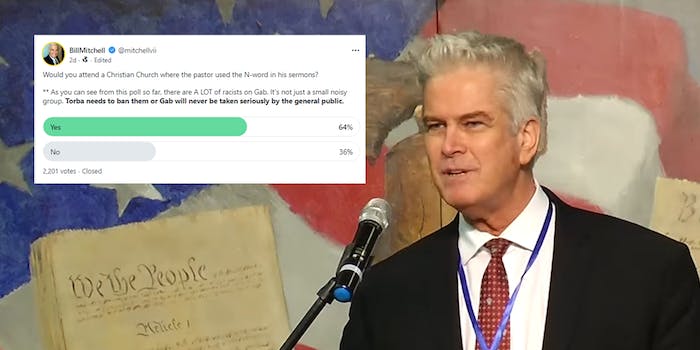 Bill Mitchell has since said he'll stay in spite of the racism.

Mitchell, whom Twitter banned in 2020, issued his proclamation after running a poll that he says proves racism is a feature, not a bug, on Gab.

In the poll, Mitchell asked if people would attend a church where the pastor used the N-word in their sermons. More than 2,000 voted. Nearly two-thirds said “yes.”

Many also commented by defending using the racial slur.

“Social conditioning made you afraid of words,” reads one of the least offensive comments. “This is literally mind control.”

Mitchell was distraught. Apparently, he was surprised that the platform where the Pittsburgh synagogue shooter shared his antisemitism has a problem with racism.

“As you can see from this poll so far, there are A LOT of racists on Gab,” Mitchell wrote. “It’s not just a small noisy group.”

He’s also complained about having to block “over 100 accounts a day.”

He then delivered a warning to Gab CEO Andrew Torba.

“Torba needs to ban them or Gab will never be taken seriously by the general public.”

He also claimed that big accounts are “flatlining because of all the hate speech” and urged people to join Gettr, another of the many social media platforms trying to lure conservatives and the far-right.

Torba refused. He told Mitchell to leave if he wanted to.

“Go over to dopey Jason Miller’s Chinese billionaire-funded AI-censored hugbox for Israel-first RINO losers if you want a safe space to shout into the wind of bot accounts and Chinese nationals posing as Americans that make up the community over there,” Torba wrote.

The two have also tangled over Mitchell’s accusation that Torba is antisemitic. Torba said he doesn’t care what Mitchell says, and inexplicably claimed that Mitchell would call Jesus Christ, who was Jewish, antisemitic.

Mitchell later announced that he was going to quit Gab. Since then, he’s changed his mind.

He nevertheless continues urging his Gab followers to join Gettr.