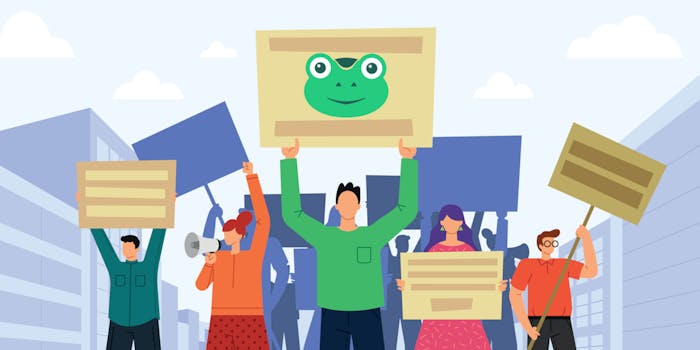 Can you boycott every business that spoke out for Black Lives Matter? Far-righters are finding out

The far-right is extremely mad about the Black Lives Matter protests.

Two weeks ago, George Floyd was killed by a Minneapolis police officer who knelt on his neck for nearly nine minutes, ignoring his pleas for his life and warnings by observers. The officer has been charged with murder.

Since Floyd’s death, hundreds of thousands of people all over the world have taken to the streets to protest racial inequality and police brutality.

The far-right can’t stand it. People on the far-right have attempted various tactics to obfuscate or counteract the message: counter-protesting, colluding with cops, and hashtags. None have worked.

So now people on Gab, one of the more insidious corners of the internet, are calling for boycotts of companies and organizations that allegedly support Black Lives Matter and, they say, antifa, and the National Association for the Advancement of Colored People (NAACP).

Getting on the list appears to simply require making any statement whatsoever supporting the protests, Floyd, or Black Lives Matter.

Boycotting all the companies is certain to prove challenging, if not impossible, however. The lists include hundreds and hundreds, including some of the largest companies in the world: AT&T, Apple, Google, CVS, Amazon, Starbucks, Disney, Sony, McDonald’s, Microsoft, ViacomCBS, and more.

Arguably, entities like Versace, Porsche, Louis Vuitton, and Peloton won’t feel this boycott’s pinch to quite the same extent as the likes of Burger King, Call of Duty, and Old Spice.

Clearly there won’t be much for boycotters to do, buy or even eat without the likes of these and companies like Xbox, Walmart, and Red Lobster. If they do go out, they’ll have to write a check or pay cash, since Visa, MasterCard, American Express, and Square are all also to be boycotted.

They could pass the time reconnecting with loved ones the old-fashioned way, but boycotting AT&T, Verizon, Boost Mobile, and T-Mobile will probably limit their ability to phone a friend.

Even Ancestry and 23andMe are on the other side of the picket line. Some may be deeply disappointed that they won’t even be able to figure out exactly how white they are.

Reading is one way around the boycott, just so long as they don’t buy books at Barnes & Noble. And while Conde Nast is a no-go, the New York Times isn’t on the boycott list. So they’ll be able to enjoy that opinion section.

In all honesty, there are so many companies that support Black Lives Matter, it might’ve been easier to list the ones that don’t.