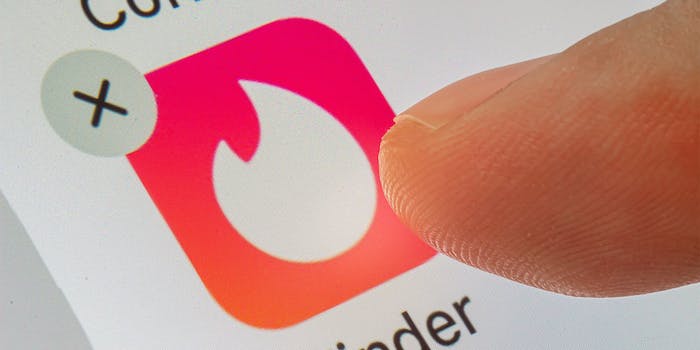 Tinder made the decision after getting called out online.

Tinder is answering the call to tackle racism and police violence by allowing its users to raise funds for Black Lives Matter and bailout funds, despite its policy that prohibits using the app for promotional purposes.

Some users were shocked after the company released a May 31 statement in support of Black Lives Matter protesters, despite banning users for trying to raise money for the cause with their profiles. When the company took to Twitter to reveal its plan to donate in support of the organization, many criticized the company’s hypocrisy. The tweet urged its users to “take action” and donate to the anti-racism cause.

“We will not be silent when we see injustice in the world,” the dating app tweeted. “Tinder is donating to Black Lives Matter to support their activism.”

Users immediately voiced their concerns, with many calling out the company for being hypocritical and trying to stifle their efforts to support the movement. Many claimed the app banned them for putting up links to Black Lives Matter in their profiles or urging other users to donate.

“Hey tinder you banned me (and others) for putting a link to donate to #blacklivesmatter you don’t care about black lives if you silence your members,” user @renee_tala shot back.

A spokesperson for Tinder told the Daily Dot that it decided to make adjustments to how its community guidelines after seeing a spike in supportive and promotional material crop up on the app. Typically, that kind of activity is immediately flagged on the platform to help weed out fake profiles or scams.

“We have been moving in real time to adjust,” a company spokesperson told the Daily Dot via email.

The company now plans to implement its policy in a way that aligns with its support of Black Lives Matter.

“We have voiced our support for the Black Lives Matter movement and want our platform to be a place where our members can do the same,” the statement reads. “We are actively working to address any issues related to account moderation at this time.”

Tinder urges anyone who believes they were wrongfully removed from the app to email [email protected] for assistance.