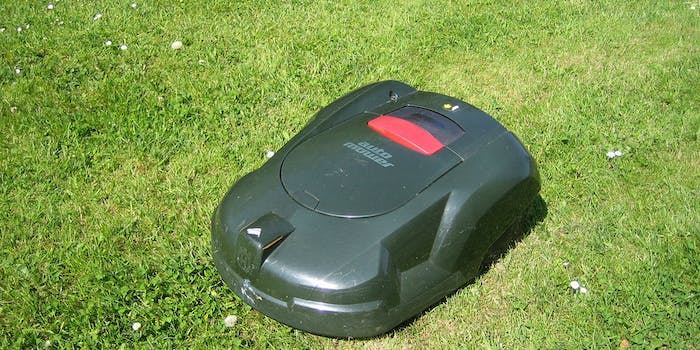 Roomba maker gets FCC permission to build a robot lawnmower

Pretty soon, all of our chores will be performed by robots.

The Roomba, the robot vacuum cleaner that has allowed millions of people to sit with their feet up while it does all of the cleaning, could soon be moving to the backyard.

The FCC has given iRobot, the company behind the wonder-gadget, permission to make and sell a robotic lawn mower that will almost certainly. The lawn mower will wirelessly connect with stakes set into the ground which operate as signaling beacons and allow the mower to cut the entire lawn.

Government permission was required “to make sure that transmissions between its machines and the antennas wouldn’t interfere with other devices using the same frequencies,” according to Reuters.

The FCC rarely gives out the waiver that iRobot received—which lets it build “fixed outdoor infrastructure” (namely, stakes) that send out low-power radio signals. But iRobot convinced the agency by saying that its beacons would only be two feet off the ground.

The National Radio Astronomy Observatory had complained to the FCC, saying that the wireless signals would interfere with telescopes.

As you can see in the video below, robot lawnmowers already exist…

…but iRobot’s wireless-beacon idea would eliminate the inconvenience of having to set up a perimeter wire in a yard, as well as the danger of slicing through it.