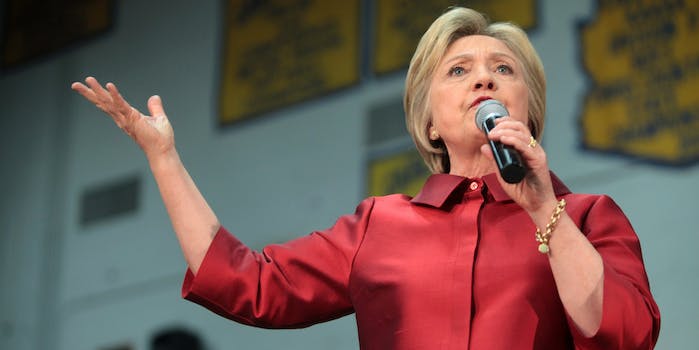 This is the most detailed account of Clinton's private email use to date.

Hillary Clinton rejected the notion that she intentionally skirted rules governing the handling of classified material by using a private email system to conduct State Department business, according to a summary of the Democratic nominee’s interview with the FBI released on Friday.

The Federal Bureau of Investigation’s documents pertaining to Clinton’s July 2 interview, which include a summary of the interview and other memos, offer the most detailed account of Clinton’s private email use during her tenure as Secretary of State, an issue that has overshadowed her presidential campaign since its inception.

Release of the documents follows the Department of Justice choosing not to indict Clinton or members of her staff. This decision came despite FBI Director James Comey saying investigators found that Clinton and staffers exercised “extreme carelessness” in their handling of classified material.

In many instances, Clinton told FBI investigators that she could not recall details surrounding her time as Secretary of State, including her training with regards to handling classified material or how often she used her Original Classification Authority to personally classify materials. In at least some instances, Clinton said her inability to remember certain details was due to a concussion and a blood clot she suffered in 2012.

Clinton told FBI investigators that she “did not recall receiving any emails she thought should not be on an unclassified system,” according to the documents, which are partially redacted. Instead, “she relied on State officials to use their judgement when emailing her and could not recall anyone raising concerns with her regarding the sensitivity of the information she received at her email address.”

When shown an email containing classified material, Clinton “said she did not believe the emails contained classified information,” the document reads.

“Clinton said she received no instructions or direction regarding the preservation or production of records from State during the transition out of her role as Secretary of State in 2013,” the document reads. “However, in December of 2012, Clinton suffered a concussion and then around the New Year had a blood clot. Based on her doctor’s advice, she could only work at State for a few hours a day and could not recall every briefing she received.”

In one instance, Clinton told investigators that she “did not know” that a “C” in parentheses in the body of a document was used to signify confidential information, and that she “could only speculate it was referencing paragraphs marked in alphabetical order.” Clinton did say she knew a “C” at the top of a document or in the subject line of an email meant the information was classified.

The FBI documents also show that Clinton used at least 13 different devices to access emails from her private server, which the FBI found was targeted by cyberattacks on multiple occasions. Investigators said they do not believe any of the attacks were successful, despite instances of insecurity on the email servers, which included the use of the Remote Desktop Protocol (RDP)—a tool used to access a server from a remote location—and the lack of encryption on the server itself.

“While the availability of RDP on a server is convenient for remote access, the FBI is aware of known vulnerabilities associated with the protocol,” the FBI’s interview summary reads.

“Hillary Clinton is applying for a job that begins each day with a Top Secret intelligence briefing, and the notes from her FBI interview reinforce her tremendously bad judgment and dishonesty,” Jason Miller, Trump’s senior communications advisor, said in a statement. “Clinton’s secret email server was an end run around government transparency laws that wound up jeopardizing our national security and sensitive diplomatic efforts.”

Miller added: “Clinton’s reckless conduct and dishonest attempts to avoid accountability show she cannot be trusted with the presidency and its chief obligation as commander-in-chief of the U.S. armed forces.”

Much of the information contained in the documents matches what Clinton has said since her interview with the FBI. Clinton has repeatedly said she regrets her use of a private email system.

Read the full report below: