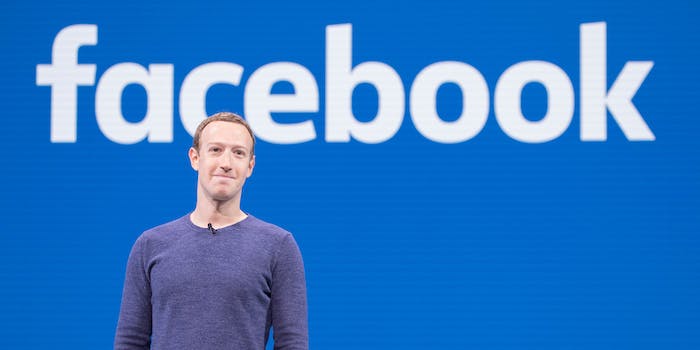 Some experts are skeptical.

Amid daunting criticism over its political ads policy, Facebook last month announced that it would implement a restricted period on new political ads from running the week leading up to the election.

It kicks off today, but some experts are wondering what impact—if any—it will ultimately have.

It’s likely that Facebook’s restricted period of political ads for a week up to the election (and indefinitely after it) was an attempt to quell some of the criticism it’s faced over its broader political ads policy. The social media giant allows politicians to post whatever they want in ads, even if they contain false information.

That policy differs from those of other social media platforms and has drawn ire from advocacy groups—and even from Facebook employees.

With that restricted period going into effect starting today, questions have been raised about whether it will actually make a difference at all.

The week before the election is certainly going to be politically fraught, and the timing could have an impact. In 2016, 11 days out, former FBI Director James Comey announced a reopening of an investigation into Hillary Clinton’s emails, something Trump capitalized on. Two days before the election, on Nov. 6, Comey exonerated Clinton. So Trump could, in this scenario, have run ads calling Clinton under investigation, whereas she would not have been able to counter in the last two days.

This year, the drama is around Vice President Joe Biden’s family. And it’s playing out along a similar timeline.

For example, Trump has run Facebook ads about Biden’s son Hunter Biden in the wake of a controversial story in the New York Post that purported to show corruption. Despite flags being raised about the report, Trump has used it as a jumping off point for ads.

If the FBI, which is looking into the laptop story, were to call it bunk in the next week, Biden would not be allowed to run ads on that, while, given a loophole in the policy, Trump’s could continue.

Facebook responded to the New York Post piece by saying it would limit its reach. A Senate committee recently voted to subpoena Zuckerberg and Twitter CEO Jack Dorsey to discuss the companies’ decisions regarding the story. But ads about the Hunter Biden story, if created before today, will still be allowed to run.

Because while campaigns won’t be able to create new ads during this final week, Facebook’s policy has a loophole: Ads that have already been approved can still run during the week ahead of the election. Advertisers can also adjust how they want to target the ad.

Essentially, the new policy is only blocking campaigns from making new ads based on information that might pop up in the final leg of the election.

Experts say that loophole could lead to things more or less staying the same.

Damon McCoy, of New York University’s Online Political Ads Transparency Project, told the Daily Dot it was “hard to definitively say” whether Facebook’s restricted period on political ads will have an impact, calling it a “big experiment.”

However, McCoy said the ability for advertisers to run ads that were approved before the deadline was a “really big loophole.”

“The ban isn’t a complete ban, it’s just a ban on new ads that weren’t submitted and approved before the start date … An obvious strategy for the more sophisticated advertisers is basically work in advance and do all your creative you want to run for that last week before the election and submit them and get them approved beforehand,” McCoy said.

But aside from the ability for ads to run during this week ahead of the election that were created beforehand, McCoy said there were other issues with the transparency surrounding them.

“If an advertiser just simply submits an ad, gets it approved, but doesn’t give that ad any budget for a while, then it would only appear once it starts getting impressions,” McCoy said. “The combination of this loophole and how they’ve built this transparency of only making transparent ads that have had impressions on their platform, kind of limits the utility of their transparency in this particular situation.”

Even Facebook has said it doesn’t expect the restricted period to be a “silver bullet.” Facebook spokesperson Andy Stone told the New York Times in September that the decision “enables campaigns to make their closing arguments and run aggressive get-out-the-vote efforts on Facebook without making it hard to contest new claims in the final days before the election.”

McCoy said the Online Political Ads Transparency Project found that political ads within the week before the 2018 midterm elections shifted from mostly donation seeking to much more “sophisticated” ones, like personalized “get out the vote” ads.

There is no reason to expect anything different this time, McCoy said, except that campaigns will have pushed to get—perhaps even more—of those kinds of ads approved before Facebook’s deadline.

“The risk and the danger in all of this is people pushing out incorrect voting information—a continuation of a lot of what we’ve seen already with all the mail-in ballot stuff and there have been a lot of confusing and incorrect messages,” McCoy said. “I’m definitely fearful there will be a lot of that type of advertising as well in here. Which is why it would be nice if they made these ads transparent ahead of time, so that we and other people could vet them.”

“But currently, how its set up, the advertisers can avoid having their ads transparent until they actually start gaining impressions on Facebook’s system. Which means that we’re not going to see them until it’s basically too late.”

So it looks like for Facebook users who have not opted out of seeing political ads, they may not see much of a difference in the number of political ads they see on their timelines.

It’s only if some late-breaking news happens, with the potential for a massive shift, that the policy will really be tested.