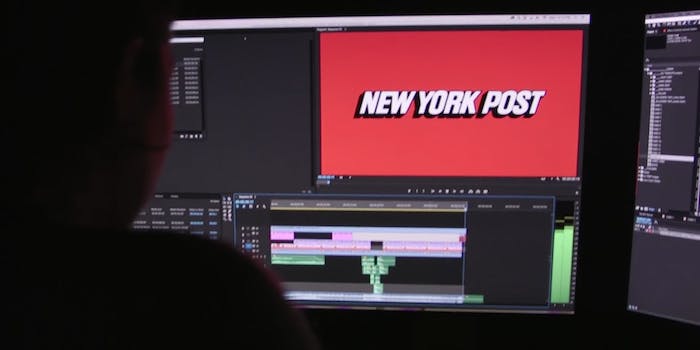 'Exactly how a professional would surface disinformation and potentially forgeries.'

Hunter in 2014 joined the board of Burisma after being discharged from the Navy Reserve due to illegal drug use. The appointment, although legal, raised eyebrows at the time given that Hunter was receiving as much as $50,000 per month despite having no experience in natural gas.

Burisma had long been accused of corruption and in 2015 Ukraine’s newly-appointed top prosecutor Viktor Shokin vowed to continue investigating the firm.

Shokin, however, shelved the investigation into Burisma and the case went dormant. Shokin was ultimately ousted due to accusations of corruption himself after Biden and numerous other Western officials pushed for his removal.

Critics of Biden suggested not long after that that the vice president had engaged in corruption by pushing for the removal of the prosecutor that was investigating the business tied to his son.

Biden himself stated during a discussion at the Council on Foreign Relation in 2018 that he had threatened to withhold a loan guarantee to Ukraine unless Shokin was fired.

The prosecutor who took the place of Shokin, however, cleared Burisma of any wrongdoing. Hunter, according to his lawyer, eventually stepped down from Burisma’s board in early 2019. To date, no direct evidence proves that Biden attempted to aid his son by calling for the removal of Shokin, who had failed to properly investigate Burisma regardless.

But the New York Post story suggests that there is in fact evidence of corruption by Biden based on “a trove of messages, documents, photos, and videos.”

At first glance, the article appears plausible. Numerous candid photos included in the trove suggests that the data did in fact come from Hunter. But how the outlet came to obtain such items is what’s raising questions.

The New York Post states that the data was “purportedly recovered from a MacBook Pro laptop” that a Delaware computer shop owner had obtained.

The shop owner alleged that the computer—which even included a sticker from the Beau Biden Foundation, named after Hunter’s brother, who passed away in 2015—was brought in for repair by an unknown individual for water damage in early April 2019 but was never picked back up.

Rid, author of the book “Active Measures: The Secret History of Disinformation and Political Warfare,” asserted that the laptop’s origin story was reminiscent of Cold War-era operations.

“This here is highly suspicious behavior,” Rid said. “Especially when viewed in the context of a political campaign. Creative, anonymous, credibility-generating, somewhat plausible. Exactly how a professional would surface disinformation and potentially forgeries.”

Rid further stated that the New York Post merely shared images of the alleged emails and not the actual emails themselves, which could contain technical information about when they were written.

The possibility also exists that the emails could be forged or manipulated and that legitimate photos of Hunter were added to the trove to increase their believability.

“Note that photos, which appear to look genuine, could be there to simply add credibility to forged emails surfaced along with the photos,” Rid said. “This would be a standard tactic in disinformation operations.”

Given the suspicious nature and timing of the New York Post‘s report, Facebook announced that it would limit the spread of the story on its platform until its third-party fact-checkers could properly vet the allegations.

“While I will intentionally not link to the New York Post, I want be clear that this story is eligible to be fact checked by Facebook’s third-party fact checking partners,” Facebook’s Andy Stone said. “In the meantime, we are reducing its distribution on our platform.”

Twitter also disabled the ability to share the story concerning the emails on its site. The Daily Dot confirmed this to be the case after an attempt to tweet the story was met with a message stating that the link had been “identified by Twitter or our partners as being potentially harmful.”

That raised the ire of many conservatives, who called it a blatant example of Big Tech’s anti-conservative bias.

“This is a Big Tech information coup. This is digital civil war. I, an editor at The New York Post, one of the nation’s largest papers by circulation, can’t post one of our own stories that details corruption by a major-party presidential candidate, Biden,” wrote Sohrab Ahmari.

The Trump campaign is responding to the blocks by tweeting out the text of the article.

According to NPR, Twitter is blocking the links in line with their “hacked materials policy,” although it is unclear the reasoning to label this information hacked.

Another allegation in the New York Post‘s article surrounds an email that purports to show Hunter setting up a meeting in Washington, D.C. between his father and one of Burisma’s top executives.

“Dear Hunter, thank you for inviting me to DC and giving an opportunity to meet your father and spent [sic] some time together,” the email reads. “It’s realty [sic] an honor and pleasure.”

The Biden campaign has since responded and claimed that the former vice president’s official schedules from that time show that “no meeting, as alleged by the New York Post, ever took place.”

While the story is still unfolding, the timing of the release also raises questions given its resemblance to the infamous leak of emails and documents in the run-up to the 2016 election.

In that incident, Russian government operatives hacked the DNC, DCCC, and Hillary Clinton campaign official John Podesta. Some of the content was laundered through WikiLeaks while the rest was dumped out through DCLeaks and Guccifer 2.0, a fake whistleblower organization and fake hacker persona created by Russian intelligence.