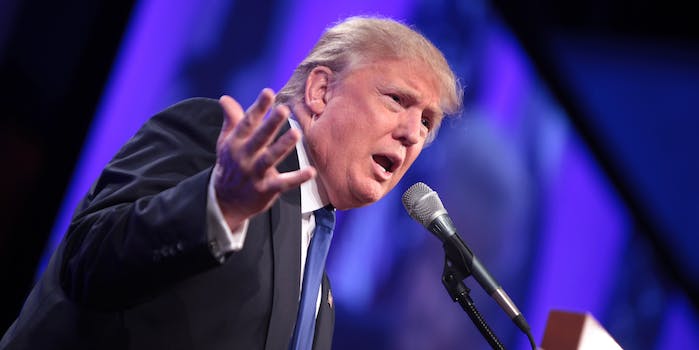 Donald Trump might have a difficult time explaining this one to women voters.

In a video obtained by the Washington Post, the Republican presidential candidate, apparently caught on a hot mic, can be heard describing in boorish detail how he gropes, kisses, and tries to have sex with women.

The 2005 recording of Trump was reportedly taken as he arrived at the set of the soap opera Days of Our Lives. The person Trump is heard speaking with is Access Hollywood host Billy Bush, who is now the host of NBC’s Today show. The pair were recorded inside a bus and outside after arriving at the set, the Post reports.

During the conversation, Trump tells Bush that because of his fame he can “do anything” to women, even “grab them by the pussy.”

He describes apparently once trying and failing to have sex with a woman. “I moved on her and failed,” he says, adding: “I did try and fuck her.”

“I moved on her like a bitch, but I couldn’t get there. And she was married,” Trump continues. “Then all of sudden I see her, she’s now got the big phony tits and everything. She’s totally changed her look.”

Bush and Trump then apparently turned their lewd remarks on Arianne Zucker, an actress who was waiting to take them on set. “Your girl’s hot as shit, in the purple,” Bush says.

Trump replies: “I’ve gotta use some tic tacs, just in case I start kissing her. You know I’m automatically attracted to beautiful—I just start kissing them. It’s like a magnet. Just kiss. I don’t even wait. And when you’re a star they let you do it. You can do anything.”

“Whatever you want,” Bush apparently says.

“Grab them by the pussy,” Trump says. “You can do anything.”

In a statement released without context soon after the Post published its report, Trump responded to the release of the video, calling it “locker room banter” and “a private conversation that took place many years ago.”

He added: “Bill Clinton has said far worse to me on the golf course—not even close. I apologize if anyone was offended.”

Hillary Clinton, Trump’s Democratic rival and the first female presidential nominee of a major party, responded to the recording in a tweet: “This is horrific.”

This is horrific. We cannot allow this man to become president. https://t.co/RwhW7yeFI2