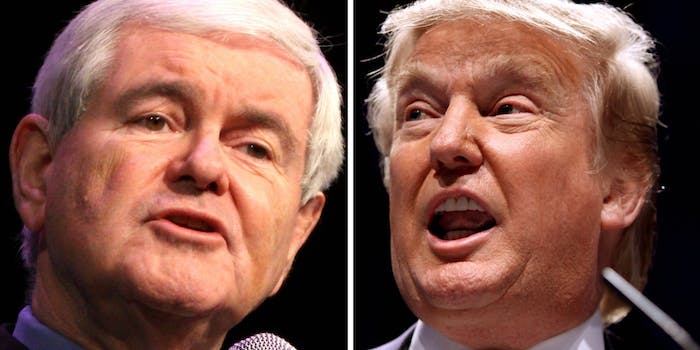 A decision will be made soon.

Many have said that if Donald Trump is to win the coveted title of President of the United States in the November election, he needs to pick a running-mate who knows politics.

Based on his reported vice-presidential shortlist, Trump is doing just that.

Rumor has it that Trump has narrowed down his list of potential VP contenders just weeks before his party is expected to nominate him as the Republican candidate for the presidency.

While Trump’s much anticipated VP pick is expected to be announced sometime next week, here are some of the men and women the presumptive GOP nominee is said to be considering.

Deemed Trump’s “Dream Veep” by Time and the “leading candidate” by the Washington Post, Gingrich is seemingly the front-runner for a Trump  White House vice presidency. If Trump wants an insider with a lot of political experience, Gingrich—a former House speaker who represented Georgia in Congress for 20 years—is arguably the most qualified out of all the contenders.

The pair campaigned together at an event in Cincinnati on Wednesday night where Trump called Gingrich “strong” and “tough.” In response, Gingrich said that Trump “is going to kick over the table” in Washington if elected. According to the National Review, the event was basically a try-out for a Trump-Gingrich ticket.

“Newt has been my friend for a long time,” Trump said at the event. “And I’m not saying anything, and I’m not telling even Newt anything, but I can tell you, in one form or another, Newt Gingrich is going to be involved with our government. That I can tell you.”

Besides his knowledge of the Washington machine, many say picking Gingrich would be the smartest move for Trump due to his political prowess and inherent power.

“The former Speaker, once the most innovative and formidable politicians in America, is a Churchillian figure. That kind of selection by Mr. Trump would, first, telegraph the caliber of people that he plans to bring to his administration,” wrote David Lane of Time.

Lane continues: “Second, [Gingrich would] lend insight into the sort of selection he plans to make for Supreme Court Justices and third, show the type that Trump would elevate in military leadership. It would say: Under a Trump/Gingrich administration, American exceptionalism would again return to the forefront of world leadership.”

Trailing behind Gingrich for the VP slot is Gov. Chris Christie, who dropped out of the presidential running in February after a disappointing finish in the New Hampshire primary.

Soon after his withdrawal from the race, Christie endorsed Trump, calling him “a successful person” who “isn’t afraid to tell it like it is.”

“I am proud to be here to endorse Donald Trump for president of the United States,” Christie said. “The best person to beat Hillary Clinton … is undoubtedly Donald Trump.”

CNN reports that Christie received the vetting paperwork last week. Though the two ran against each other in the GOP primary, Christie and Trump are reportedly long-time friends. After dropping out of the race, Christie helped Trump prep for debates, and he later became the head of his transition planning team.

According to campaign insiders who spoke to NJ.com, Trump is unlikely to pick Christie. “The people who’ve been pushing the Christie narrative are Christie people,” said one of the sources. The insider adds, however, “it’s Trump—I doubt anyone really fully knows what he’s going to do.”

Besides Christie and Gingrich, Mike Pence is another candidate viewed as a “likely pick” for Trump’s VP slot.

The move toward Pence may come as a surprise, as the Indiana governor did not back Trump in his state primary, instead offering his endorsement of Texas Sen. Ted Cruz. However, Pence quickly switched gears and endorsed Trump less than a week later, saying he’s “fully supportive of our presumptive nominee, and [thinks] Donald Trump will do well in the State of Indiana.” Rumors of Pence’s vetting swirled after Trump met with him over the July 4 weekend.

Pence has repeatedly been praised for his support of religious freedom. If Trump were to pick him for the VP slot, the presumptive GOP nominee may gain more support from his party’s evangelical and conservative wings. The governor also served in Congress for 12 years, so, like Gingrich and Christie, he offers extensive knowledge of Washington.

Michael Caputo, a former Trump adviser, told the Indy Star that Pence would bring “executive experience, a respected congressional record, and reassurance to conservatives who may be wary of Trump’s positions on several issues.”

“The Republican Party has a deep bench of qualified vice presidential candidates,” Caputo added. “Some of them ring certain bells, and others ring other bells. I think Mike Pence rings the most bells of all.”

When Sen. Joni Ernst of Iowa (profiled below) withdrew her name as a vice presidential nominee, she suggested Pence would be the best pick for the job.

“I will admit that I am a Mike Pence fan,” Ernst told Politico. “He is so well-rounded, served as a governor, and I think he’s a great conservative. So, I don’t think he could go wrong.”

The only thing apparently stopping Pence from securing the nomination, beyond the official confirmation from Trump, is Pence’s current role as governor. Indiana state law says Pence can’t run for governor and another office at the same time, so if he were the chosen VP pick, he would have to resign in his home state.

According to CNN, Trump said in late May that Jeff Sessions is “certainly someone [he] would consider” for a running mate.

At a news conference at Trump Tower in New York, Trump called Sessions a “fantastic person” who would “absolutely” be looked at for the vice presidency.

Sessions and Trump are seemingly united on their wish to halt illegal immigration, and the Alabama senator has been very vocal of his support for Trump since the beginning. Right before the Super Tuesday primary in late February, he became the first sitting senator to endorse Trump.

“At this time in American history, we need to make America great again,” Sessions said at the time. “I am pleased to endorse Donald Trump for president of the United States. … A movement is afoot that must not fade away.”

Like the men aforementioned, Sessions—a fourth-term senator—has extensive knowledge of Washington. He is also a trusted colleague of Trump, who reportedly helped Trump craft his security policy. While many known members of the GOP are hesitant to throw their support behind Trump, Sessions has repeatedly asked for the party to support the Republican nominee. In early May, Sessions even asked House Speaker Paul Ryan (R-Wisc.) to endorse Trump.

“The Speaker of the House is a big leader and an important figure in the Republican Party,” Sessions said. “He calls on House members every day to stand with him in unity. He needs to set a good example for Republicans.”

Now here’s a look at people who were reportedly on the VP shortlist, but have since withdrawn their names from consideration.

The only female candidate on Trump’s list of potential running mates excused herself from the running on Wednesday, saying she preferred to stay focused on politics in Iowa.

“I made that very clear to him that I’m focused on Iowa,” Ernst told Politico. “I feel that I have a lot more to do in the United States Senate. And Iowa is where my heart is.”

Reports that the senator was being vetted began circulating around July 4 weekend after word got out that Ernst and Trump planned to meet in New Jersey. The two reportedly discussed how to strengthen the economy and national security.

It was great spending time with @joniernst yesterday. She has done a fantastic job for the people of Iowa and U.S. Will see her again!

Ernst is a retired lieutenant colonel in the Iowa Army National Guard and a veteran of the Iraq War. She is the first woman to represent Iowa in Congress and the first female veteran to serve in the U.S. Senate. Her military background could’ve helped Trump with his foreign policy platform, and the fact that she’s a woman could’ve helped Trump among female voters, a group where only 23 percent view him favorably.

While initially rumored to be getting vetted for VP, the senator dispelled any rumors on Wednesday, saying he’s “not interested.”

“No, I am not being vetted, and I have no reason to believe I’ll be selected,” Cotton said in an interview with CBS This Morning on Wednesday. “I’m very proud and happy to be serving the people of Arkansas and the Senate, and I look forward to continue to serve them.”

The rumors regarding Cotton’s circulated following a tweet by Trump over July 4 weekend.

Senator Tom Cotton was great on Meet the Press yesterday. Despite a totally one-sided interview by Chuck Todd, the end result was solid!

At 39 years old, Cotton is currently the youngest U.S. senator and an experienced war veteran. Following the attacks of Sept. 11, 2001, Tom joined the U.S. Army and spent five years on active duty. Like Ernst, Cotton would offer Trump valuable expertise on foreign policy.

When asked if he would take the spot if offered, Cotton declined to answer.

“I’m not going to speculate about hypotheticals. I don’t believe that will happen, no,” he said.

While originally on Trump’s shortlist of contenders, Corker withdrew as a potential running mate on Wednesday. According to the Washington Post, Corker informed Trump of his decision the previous day before the two attended a political rally, saying he’s more “policy-suited” than political.

At the campaign in Raleigh, North Carolina, Trump introduced the senator and chairman of the Senate Foreign Relations Committee as “somebody respected by everybody.”

Reports show Corker was one of the few senators to show early support for Trump, even going so far as offering to help Trump develop a foreign policy platform. While his actions fueled VP hype, Corker refused to initially comment on the race and who he would support. Corker later welcomed Trump when it was rumored the Republican Party was plotting to use the national convention to nominate a candidate other than Trump.

Despite withdrawing for the VP slot, the interview with the Post seemingly implies that there’s no bad blood between Corker and Trump.

“I’m going to move on,” Corker said. “I am very positive about him as a person. It was incredible to be with him in Raleigh and see the way people react to him. They’re so excited, and I truly believe he has such an opportunity ahead.”