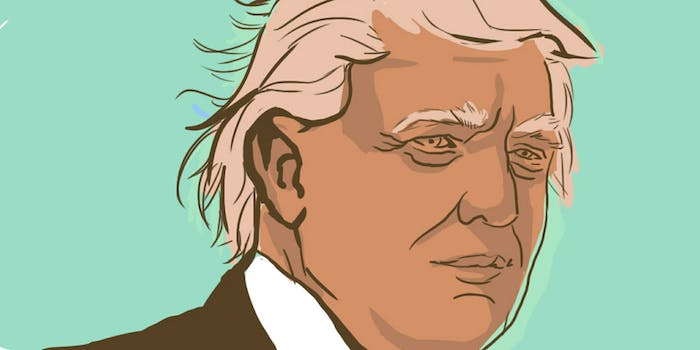 'You're running for president of the United States. Your words matter. Trurthfulness matters. Fact-based stuff matters.'

At issue were Trump’s claims that he saw footage of Muslim communities in New Jersey celebrating the Sept. 11, 2001, terrorist attacks, claims that no mainstream news outlet has been able to independently verify.

While Trump stuck to his guns, insisting that he saw the footage with his own eyes, the real-estate-heir-turned-reality-TV-star’s willingness to stick to his story despite overwhelming evidence disproving it may have actually broken Todd, the venerable NBC newsman.

“You said you saw this. Nobody can find evidence of this,” Todd said. “And, more importantly, the article that you tweeted out that backed you up—that, in itself, there were three or four different reports that month in New Jersey that said it was a myth that was spread, that it was a false rumor. Where did you see this?”

Trump wasn’t having any of it.

“Chuck, I saw it on television; so did many other people,” said Trump, who once purchased a full-page advertisement in the New York Daily News calling for the death penalty for five African-American teenagers accused of raping a white woman who was attacked while jogging in Central Park.

The men were convicted but later released after someone else confessed to the crime. The innocent parties received multi-million-dollar settlements from New York City for wrongful imprisonment. Trump has not apologized.

“I’ve heard Jersey City, I’ve also heard Patterson,” Trump said, referring to cities in which Muslims cheered for terrorism. “It was 14 years ago. But I saw it on television, I saw clips, and so did many other people. And many people saw it in person.”

The bombastic businessman—who recently asserted at a presidential debate that he had never called GOP rival Marco Rubio “Mark Zuckerberg‘s personal senator,” despite that phrasing being taken verbatim from his campaign website—added that his organization had received “hundreds of phone calls” from people who also remembered seeing Muslims not only cheering the falling towers but having “tailgate parties…like for a football game where you have hundreds and hundreds and maybe thousands of people having tailgate parties.”

“This didn’t happen in New Jersey!” answered Todd. “There were plenty of reports. You’re feeding a stereotype.”

Trump—who once claimed that the United States is the only country in the world with birthright citizenship, despite it actually being one of 33 with such a policy—refused to back down, citing the existence of a large Muslim-American community in the area.

Trump—who recently came under fire for retweeting an image originating on a neo-Nazi Twitter account that showed fictional crime statistics by race—added that people had sent him messages on Twitter corroborating his story.

“Just because somebody repeats something doesn’t make it true,” said an increasingly frustrated Todd. “You’re running for president of the United States. Your words matter. Trurthfulness matters. Fact-based stuff matters.”

“I have a very good memory, Chuck, I’ll tell you, I have a very good memory,” said Trump, who told MSNBC’s Morning Joe on Monday that the reason why no one has been able to find any video corroborating his story is due to the “ancient” technology that TV stations used in 2001. “I saw it somewhere on television many years ago, and I never forgot it.”

Pulitzer Prize-winning fact-checking organization Politifact has evaluated the veracity of 71 of Trump’s statements. Not a single one has been given an entirely “true” rating. The outlet lists 44 of Trump’s statement as either “false” or “pants on fire.”

In contrast, Democratic frontrunner Hillary Clinton has had 138 statements tested by Politifact, with 39 labeled fully “true” and only 17 labeled either “false” or “pants on fire.”