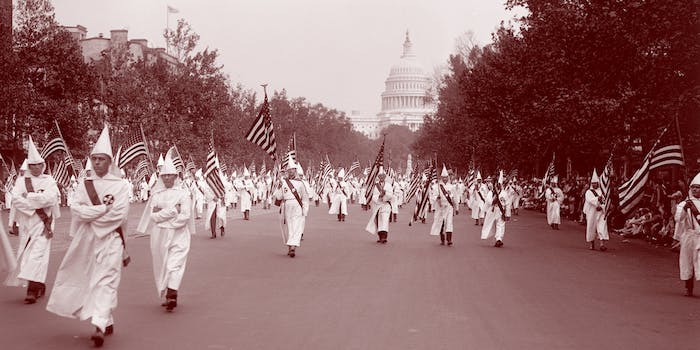 Trump has amassed quite a collection of endorsements from racists.

“The reason a lot of Klan members like Donald Trump is because a lot of what he believes we believe in,” says a hooded white figure.

That’s how Hillary Clinton’s latest campaign video begins, and it only gets darker from there.

The man in the distinctive Ku Klux Klan attire didn’t give his name when he was interviewed three months ago by a black reporter in Richmond, Virginia. He identified himself only as the “Imperial Wizard” of the Rebel Brigade Knights, a group that says it acknowledges the “horrible and hateful acts” committed by fellow klansmen in the past but is nevertheless carrying on the racist and xenophobic traditions, hoping to “ensure a safe and secure future for Caucasian Americans.”

There's a reason the most hateful fringe of the right wing is supporting Donald Trump.https://t.co/AqB3DM2m0N

The ad, which was tweeted by Clinton’s verified Twitter account Thursday morning, and, within the first hour, shared by more than 4,000 other accounts, continues with a clip of Samuel Jared Taylor, a prominent white nationalist who recorded robocalls supporting Trump’s campaign well before the candidate locked down the Republican Party’s nomination.

Last year, in the pages of the white nationalist magazine American Renaissance, of which Taylor is the founder, he wrote that Trump was “easily the best presidential candidate on border security and immigration since Pat Buchanan.” Taylor further extolled Trump’s plans to “deport illegals” and suggested halting immigration entirely “until every American who wants a job gets one.”

“Voting against Donald Trump is really treason to your heritage.”

David Duke, a Holocaust denier and former “Grand Wizard” of the Ku Klux Klan, also makes an appearance in the video. “Voting against Donald Trump,” he says, “is really treason to your heritage.” Duke has publicly encouraged Trump to continue his focus on the immigration, calling it his path to “power in the Republican Party.”

In February, CNN’s Jake Tapper asked Trump to denounce the endorsements of current and former KKK members. Trump claimed he needed to do “more research” before taking a position. Despite the ample context provided by Tapper, Trump appeared to shrug off the question, saying he didn’t “know anything about” white supremacy. He later said he had “disavowed” Duke.

The Clinton ad also includes footage of Trump campaign CEO Steve Bannon, the executive chairman of Breitbart News. Bannon and his website have embraced the ambiguously-defined “alt-right” political philosophy, which critics say is no more than a vehicle for white ethno-nationalism.

A spokesperson for the Trump campaign did not respond to a request for comment.