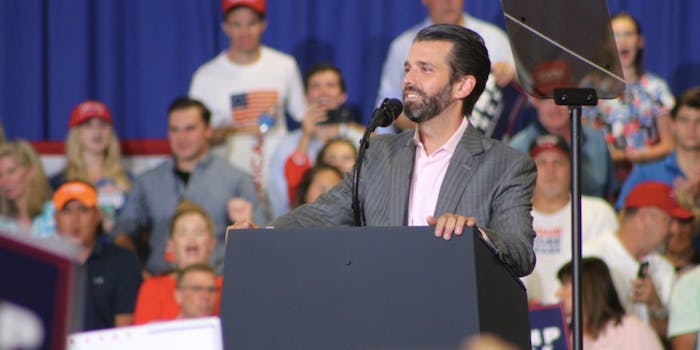 He shared a Breitbart video about hydroxychloroquine.

A screenshot shared from Republican strategist Andrew Surabian shows that Twitter temporarily blocked the president’s son for violating the policy on spreading misleading and potentially harmful information related to the coronavirus. The screenshot says Trump Jr. can’t tweet or retweet for the next 12 hours.

“We understand that during times of crisis and instability, it is difficult to know what to do keep yourself and loved ones safe,” the Twitter statement reads. “Under this policy, we require the removal of content that may pose a risk to people’s health, including content that goes directly against guidance from authoritative sources of global and local public health information.”

President Donald Trump also retweeted the viral video. Twitter appears to have removed the content. In its place is a note saying that, “This tweet is no longer available.” However, Trump’s Twitter is still functioning as normal, with no signs of a temporary suspension.

The conversation surrounding anti-malarial drug hydroxychloroquine has been ongoing for months.

First, the drug was being touted as a potential coronavirus cure. When Trump began backing it as a treatment for the virus, demand skyrocketed. Soon after, physicians expressed concern about the potential health risks of taking hydroxychloroquine. Studies continued to be released, most finding no benefit—and several potential risks—in using the drug to combat coronavirus. Despite most experts and physician’s solidarity on this point, the president has continued to push hydroxychloroquine as a legitimate treatment.

In an effort to redirect the conversation to more effective treatments, Twitter and Facebook have been cracking down on false or misleading information regarding hydroxychloroquine and chloroquine.

The video from Breitbart News was quickly scrubbed from Facebook and YouTube for “sharing false information about cures and treatments for COVID-19,” according to Andy Stone, Facebook’s policy communications director. Soon after, the same video was removed from Twitter.

The video shows several doctors, including Stella Immanuel, calling the studies against the use of hydroxychloroquine to treat the coronavirus “fake science.” The doctor has previously shared beliefs about alien DNA and the physical effects of people having sex with witches in their dreams, according to the Daily Beast.

The removal of the Breitbart video quickly incensed Trump and his base, who saw the move as an attack. They began tweeting out their support of the drug, and anecdotes about its efficacy in clinical trials.

Soon, the hashtags #HydroxychloroquineWorks and #Breitbart were trending. The two hashtags are populated with heaps of conspiracy theories, primarily accusing Facebook and Twitter of silencing the truth.

Meanwhile, social media users on the other side of the political aisle blasted the video for its inaccuracies. Some even called for Breitbart News to be investigated. They labeled the doctors seen in the video as “frauds” and questioned their merits as doctors. They praised Twitter and Facebook for promptly removing the posts.