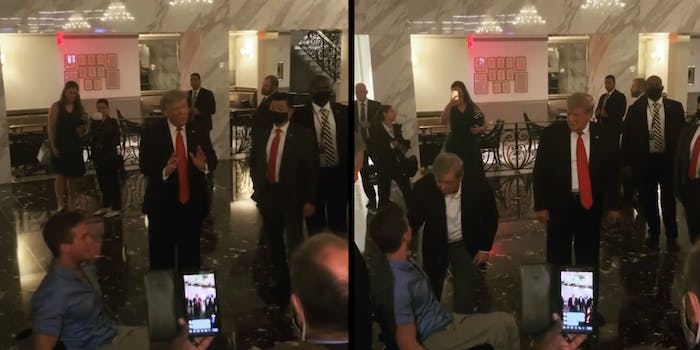 It didn't take long for Trump to not listen to his own tweet.

President Donald Trump was spotted not wearing a face mask at a fundraiser on Monday night, just hours after he called wearing one “patriotic” in a tweet.

Video of the event, held at Trump International Hotel Washington, D.C., shows Trump and several other prominent Republicans not wearing a mask.

Madison Cawthorn, a political newcomer who recently won a primary to fill the seat vacated by Chief of Staff Mark Meadows, posted a video on Instagram that shows Trump, Meadows, Rudy Giuliani, and Sen. Lindsey Graham (R-S.C.) mingling at the hotel all without wearing masks.

The video came just hours after the president finally made a pitch to Americans to wear a mask amid the coronavirus pandemic.

Trump tweeted a black-and-white photo of himself wearing a face mask on Monday afternoon, writing that “many people say it is patriotic to wear a face mask when you can’t socially distance.”

He continued: “there is nobody more patriotic than me, your favorite president!”

The president has had a dismissive view of masks for months and even retweeted a tweet from a Fox News personality who mocked former Vice President Joe Biden’s appearance while wearing a mask.