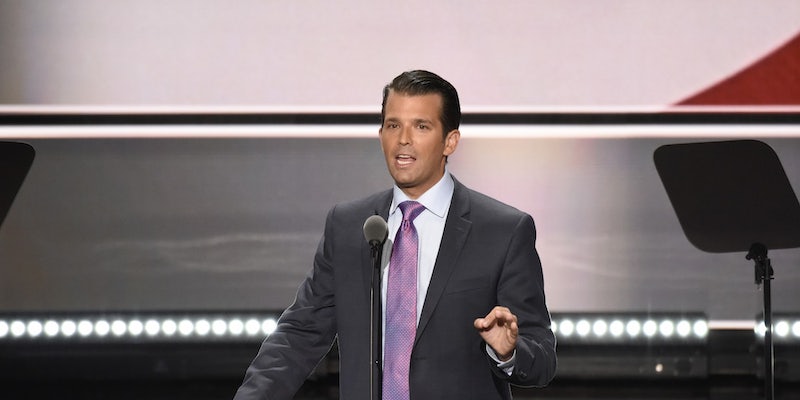 Trump's eldest is apparently not above the dirty tactics he claims to eschew on television.

But Trump Jr., despite his call for decorum, is evidently not above a little smearing, as long as his father is not on the receiving end.

On Tuesday, Trump Jr. used his Twitter account to circulate a visibly fake letter, purportedly authored by Clinton, to nearly 630,000 followers. The letter, which appears on crudely designed Hillary for America campaign stationary, claims to originate with the former secretary of state’s national campaign headquarters.

The user who created the tweet proclaimed in all-caps that the letter is among files stolen from Democrats and released by WikiLeaks and, ironically enough, concludes with the hashtag “#RiggedElection.” Within the first four hours, the message was retweeted by more than 800 other accounts, including Trump Jr.

The letter was crafted to suggest Clinton was bribing pollsters—specifically, Public Policy Polling (PPP), which conducts polling on behalf of Democratic clients—to skew their results in her favor. It reads as follows:

From: Hillary
To: Public Policy Polling
Your latest poll is unacceptable. We aren’t paying you $760,000 per month to show a FIVE POINT LEAD. Are you trying to make Trump win? We will be ending our contract with your company unless results improve quickly.

Tom Jensen, director of PPP, said that his firm had found over the last year that Trump supporters “will believe almost anything—and evidently that includes the candidate’s own son.”

Trump Jr.’s retweet, Jensen said, “helps explain the mindset that leads to us consistently finding that about 70 percent of Trump voters think that if he loses the election, it will only be because it was rigged.”

The Clinton campaign was none too amused by Trump Jr.’s antics. “One thing that has been made abundantly clear,” said Josh Schwerin, a spokesman for the Clinton campaign, “is that there is no conspiracy theory too outlandish or obviously false for the Trump campaign to promote.”

The Trump campaign did not respond to a request for comment.