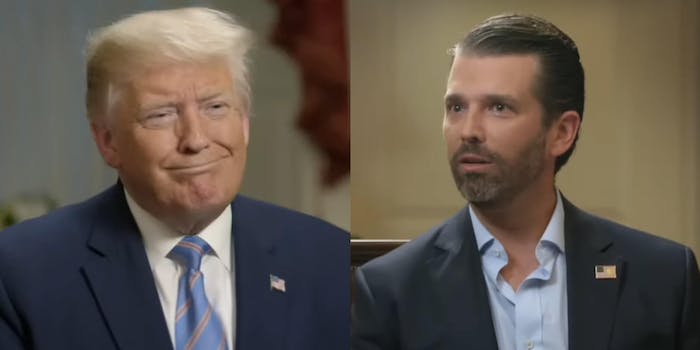 'In some cases I think it's good, but in your case: get rid of it.'

President Donald Trump is not a fan of his son’s beard.

The president made his beard-related feelings known in an interview with Donald Trump Jr. on Thursday night that was labeled as a “Father’s Day special” for the campaign.

Overall, the interview was what you’d expect: Trump Jr. praising his father’s time in the White House with some over-stylized The West Wing-inspired graphics at the beginning and the end.

But toward the end of the interview, Trump Jr. asked his father a question about the facial hair he’s grown, as well as Cruz’s and Paul’s.

“I’ve heard from some our mutual friends that you don’t love my beard, but given the quarantine, I’d like to know between myself, Ted Cruz, and Rand Paul—who have all grown sort of quarantine beards—whose is best and why?”

The president didn’t rank the beards, but did make it known he wasn’t a fan of any of them.

The president then returned to his son’s beard.

“In some cases I think it’s good, but in your case: get rid of it,” Trump said before appearing to say that he was kidding.