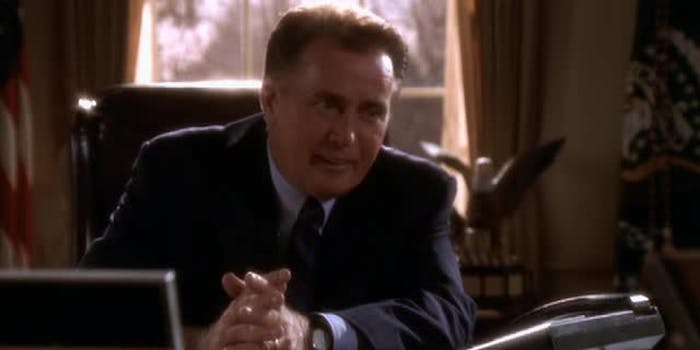 In between the walk-and-talks and political drama were some priceless Thanksgiving moments.

NBC’s The West Wing, which ran from 1999 to 2006,  is widely considered one of the greatest TV dramas of all time. It won 26 Emmys, including four for Outstanding Drama Series. But don’t let its pedigree as a critically acclaimed drama fool you—the Aaron Sorkin series about life on the president’s senior staff was equal parts dramatic, poignant, and funny. In fact, some of The West Wing‘s best comedy bits come from its two Thanksgiving episodes.

What better way to spend your Thanksgiving afternoon before the big feast arrives than by looking back at some of TV’s funniest Thanksgiving moments?

Pilgrim detectives and the arrival of the turkeys

At the beginning of Season 2 Episode 8 “Shibboleth,” White House Communications Director Toby Ziegler (Richard Schiff) and his deputy Sam Seaborn (Rob Lowe) are working on the president’s Thanksgiving proclamation. Toby, ever the straight man, wants to focus on the task at hand, but Sam wants to let off a little steam with an idea for an action-adventure series. After Press Secretary C.J. Cregg (Allison Janney) interrupts them, they—along with Deputy Chief of Staff Josh Lyman (Bradley Whitford)—find a way to get back at her.

A touching moment over a turkey knife

One of the best relationships on The West Wing was the one between President Jed Bartlet (Martin Sheen) and his personal aide Charlie Young (Dulé Hill). In “Shibboleth,” the president has dispatched Charlie to find him the best turkey-carving knife available. After several failed attempts, Charlie arrives with “a winner.” What he doesn’t know is the reason why the president needs a new knife in the first place: He’s giving his current, historic knife to one of his closest staff members.

In the real world, the White House has taken to letting the public decide which of two turkeys the president should pardon. In “Shibboleth,” C.J. Cregg has the unenviable job of choosing between candidates Troy and Eric. She picks Eric because he’s more photogenic, but once she realizes the awful reality of what this means for Troy, she decides to ask the president to extend his executive mercy a second time.

“The more photo-friendly of the two gets a presidential pardon and a full life at a children’s zoo,” Cregg says. “The runner-up gets eaten.”

“If the Oscars were like that,” Bartlet deadpans, “I’d watch.”

If you’re a fan of The West Wing, you know this scene—from Season 3 Episode 8 “The Indians in the Lobby”—like the back of your hand. The president finds himself in need of turkey-cooking advice, and he can’t consult his executive chef because he’s embarrassed about mistakenly scolding the man.

Charlie has informed the president that there is a number you can call to get Thanksgiving meal-preparation advice from experts: the “Butterball Hotline,” known in the real world as Butterball’s Turkey Talk-Line. When Bartlet calls the number himself, his staff must scramble to conceal his identity.

Presidential phone calls don’t get much funnier than this.

The meaning of Thanksgiving

Let’s end on a hopeful note. The episode “Shibboleth” revolves around a group of Christian Evangelicals who fled persecution in China and arrived in California. The California National Guard has been watching over them at an immigration facility while the president’s team debates whether or not to send them back to China. After meeting with the group’s leader to assess the veracity of his professed faith, the president figures out a way to let the pilgrims stay in the U.S. without formally welcoming them and angering China.

“They made it to the new world,” the president tells Lyman.

And that is the true meaning of Thanksgiving.