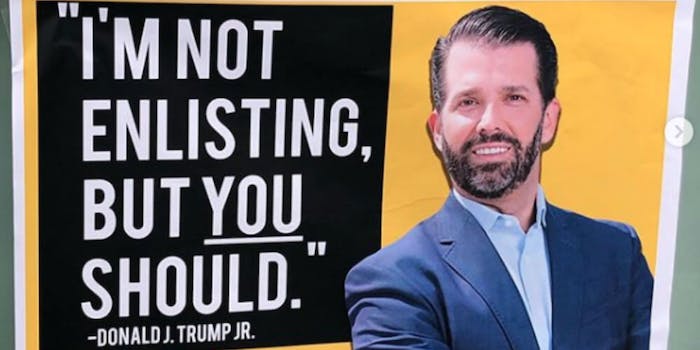 The comedians put up the posters at an Army recruitment center.

Donald Trump Jr. is the latest gun-touting conservative to be trolled for likely not enlisting in a war should there be one.

“I’m not enlisting, but you should,” the poster reads, crediting the quote to Trump Jr.

The poster shows a photo of Trump Jr., arms crossed and smiling.

“There’s weak and then there’s Trump weak,” the finer print at the bottom of the poster reads, next to a U.S. Army logo.

We put up some #honestsigns at the Army Recruitment Center. Hopefully we aren’t going to war, but if we did, we know one guy who won’t enlist.

Comedy duo The Good Liars is responsible for the stunt.

“We put up some #honestsigns at the Army Recruitment Center. Hopefully we aren’t going to war, but if we did, we know one guy who won’t enlist,” the duo, comprised of Jason Selvig and Davram Stiefler, wrote on Instagram Thursday.

“In the wake of Trump’s latest reckless foreign policy actions that could very easily result in more and more troops being sent to the Middle East, we thought the public deserved a reminder of who the Trumps are,” Selvig and Stiefler told HuffPost on Friday.

This is not the first time the comedians have targeted the Trumps.

In November, they replaced covers of Trump Jr.’s book Triggered with Daddy, Please Love Me covers. They also put in the Trump Tower gift store an image of Russian President Vladimir Putin, claiming he was the real “45th President of The United States.” And in December, they added in the gift store impeachment-themed postcards.

We changed the cover of @DonaldJTrumpJr’s book to make it a little more honest and put them up in @BNBuzz. You're welcome, Junior! #DonnyLovesDaddy

We put some postcards in the Trump Tower gift shop today to celebrate The President’s historic accomplishment.

“They’re a family that have avoided military service on a generational level,” Selvig and Stiefler told HuffPost. “Don Jr. loves to fire at helpless animals and pose for pictures with them, but he’d never go to war although he’d expect others to do it.”

Trump has been accused of using fictitious bone spurs to dodge the Vietnam War draft. And Trump Jr. has been criticized for big-game hunting. Trump Jr. and his brother Eric have been photographed posing with the carcasses of everything, from a leopard to an elephant’s tail.

“A lot of people have been reaching out to ask for the file so they can print them―so look for them all over the country,” they told HuffPost.

The Daily Dot has reached out to The Good Liars.