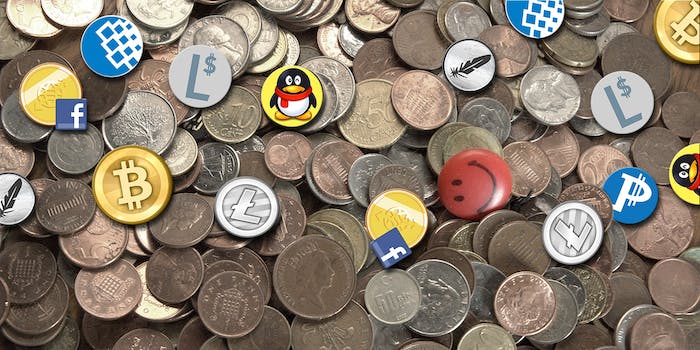 Looking for a new way to invest your money? Here's what you need to know about the six leading digital currencies.

Money has transformed from barter to skins to gold-backed currencies and fiat currencies based primarily on the faith its users have in the nation-states who issue it. In the past couple of decades, however, it has taken another turn to stateless digital currency.

Once the work of science fiction or relegated to “in-game” systems like Second Life’s Linden Dollars, Tencent’s QQ Coins and Facebook Credits, digital currencies are becoming increasingly common. They’re fueling speculation and attracting proponents who are responding as much to these monies’ philosophical implications as to their economic possibilities.

Each currency brings something slightly different to the table, but there are a few overlapping characteristics: Each is a system in itself, some almost completely closed and others meshing into the wider global economy. Each offers an answer to the problems that issue from the current troubled economic times. And each seems both unlikely to succeed, and part of an inevitable movement to include created currencies in the world’s economy. Think of digital currency as an Esperanto that people are actually beginning to speak.

With mounting press coverage of Bitcoin introducing many people to digital currencies for the first time, here’s a guide to the new trading systems of the Web—and the promise and liabilities they present.

The airwaves are cracking with news about that new smart new digital crypto-currency, Bitcoin (BTC). Designed to be unforgeable, anonymous, easily transmitted electronically, and independent of nation-states and their central banks, Bitcoin’s activity this year attracted a huge amount of attention.

Proposed in a paper in November of 2008 by a programmer (or group) who went by the name Satoshi Nakamoto, the system launched for real in January of 2009. It grew more slowly than not for the next couple of years, with occasional dashes upward and crashes back down.

But from this year, BTC got down to the serious business of financial melodrama.

First it soared in value, eventually rocketing up over $200, based many said on talk of it as an alternative to the euro, which was failing tragically in Cyprus and the U.S. Treasury’s recognition of it with a new, vague ruling. Then it fell to under $30, part due to a series of sustained distributed denial of service (DDoS) attacks against the largest exchange for the currency, Japan-based Mt. Gox.

Since then, it did a convincing imitation of a sitcom corporate earnings graph, to finally settle again at around $120. After a U.S. government seizure of funds from a Dwolla account that fed into Mt. Gox, the exchange has changed its policy. It now requires verification from its users, putting a serious kink in the vaunted anonymity of Bitcoin.

This by no means heralds the end of Bitcoin. For one thing, if you don’t use an exchange you can retain your anonymity, at least until you cash out. And as you see from this buyer’s guide, there’s a thriving market for the currency.

Litecoin (LTC) was built on a foundation of BTC code and launched in October of 2011. It was designed to transfer between users and exchanges at a much faster rate  and to be much more easily mined than BTC.

Litecoin is not released by a central bank of any sort. Instead, it is mined, a process that involves individuals using their computing power to roll digital dice. A certain rare combination of those dice will “unlock” a “block” of coins and those coins become the property of the miners.

BTC, having been around for a while, unlocks less often, requires much more computing power to do so (to the point that first special computers, now special chips, have been designed with that end in mind) and yields a smaller block when it does. Litcoin miners can use their personal computers to unlock LTC blocks, making it more accessible to hobbyists.

Litecoin seems to be growing more slowly but with less disruption than Bitcoin. It is also largely free of the illicit reputation Bitcoin sometimes has from its association with the Silk Road site.

Sometimes, there are benefits in not being first to market.

Just as Litecoin was built on a foundation of Bitcoin code, Feathercoin is based on Litecoin, and for some of the same reasons.

Feathercoin, as it claims on its website, “has a block reward of 200 coins and will have a total of 336 million coins. This makes it four times that of LiteCoin.”

As a number of investors in Bitcoin have noted about that currency, it will only truly become viable when it is adopted as a currency. Otherwise, and in the meantime, it remains an investment vehicle. With ease of mining as its primary selling point, Bitcoin’s legitimacy as a currency, extending if not replacing traditional currencies, seems less assured.

One way Feathercoin is trying to distinguish itself from the libertarianism-freighted, crime-tainted Bitcoin is in its marketing and customer relations.

As South Africa-based Memeburn noted, “Feathercoin is trying to be more friendly while the community creates ‘tutorials, animations, jingles, technical guides, videos, and starter kits to enable people who want to get involved.’”

The Russia-based WebMoney was founded in 1998 and uses a digital currency, WebMoney units. But it is a strictly in-system currency. That is, your WMZ (WebMoney dollars) or your WMR (WebMoney rubles) cannot be used to, say, buy a pizza, unless of course the pizza is being offered for sale within the WebMoney system.

Goods offered for sale, or “valuables of various legal nature” as they put it on their About page, are stored with “guarantors,” entities who agree to store valuable properties from bonds and transfer them when the WebMoney units are transferred.

A benefit of WebMoney, and an aspect that makes it more of a payment system than an independent currency, is how it is tied to fiat currencies. One WMZ, for instance, is always going to be worth $1.00.

With the demise of Liberty Reserve, some security experts, including Sophos’s Chester Wisniewski, believe WebMoney is a prime candidate for cybercriminals to transfer funds. Writing on the Naked Security blog, Wisniewski noted that a poll on a cybercrime forum indicated criminals prefer WebMoney over Bitcoin four to one.

PPcoin, also known as PeerCoin and Peer-to-Peer Coin, is interesting in that it can be traded not only for fiat currencies but also for other digital currencies.

Like Bitcoin, Litecoin, and Feathercoin, PPcoin too increases itself via mining. However, it uses a proof-of-stake system to prevent monopolies on the currency. Proof-of-stake ensures that if a miner, for instance, has 0.5 percent of the existing currency, he or she will only be allowed to mine 0.5 percent of the outstanding currency, making it much more difficult to secure a monopoly on the currency.

As over time the mining difficulty increases on a currency like Bitcoin, fewer people will mine. Eventually, one person or group could come to possess 51 percent of the currency.

Like Credits, Ven also debuted as a Facebook application in 2007. By 2008, however, it had slipped the leash, moving off the social network and into the world. Anyone with an email address can use Ven, though it must still be exchanged within the Hub Culture Facebook app.

In 2009, it was adopted by the environmentally minded Hub Culture “collaboration community,” which now manages the currency. Members use Ven to trade for goods, services, special skills, and expertise.

Due to a deal struck with Thomson Reuters, in 2011 Ven became the first digital currency to be traded on the financial markets. It now appears on half a million financial terminals worldwide. (Ven is a closed system, redeemable in goods and services but never cash.)

The value of Ven is priced by Thomson Reuters based on a “basket” of currencies, commodities and carbon futures. Ven is used to purchase carbon offsets. The first exchange of that nature using the curreny was by Nike who sold offsets for Ven currency on the American Carbon Registry.

The annual $10,000 Ven Prize “for innovation and collaboration toward sustainable economic systems” is funded by donations in Ven currency to Hub Culture.

Due to its association with the prize, Hub Culture in general, and with carbon offsets, Ven has become the “green” member of the digital currency family.

This is not an exhaustive encyclopedia of currently operational digital currencies. Currencies not covered here include Freicoin, whose business model is based on demurrage; Namecoin, which is actually an “alternative distributed Domain Name System”; and Terracoin, among others.

Hopefully the half a dozen currencies discussed above will give the reader a sense of the spread and specialization, as well as the commonalities, of digital cryptographic money systems and trading platforms.

The apparent crackdown on digital currencies by the U.S. Department of the Treasury—which started with the ruling on digital currency issued by U.S. Department of the Treasury’s Financial Crimes Enforcement Network (FinCEN) and led to the seizure of Mt. Gox exchange’s Dwolla funds and its subsequent decision to require authentication of its users, as well as the seizure and closure of Liberty Reserve—has been seen by some as the beginning of the end for such wild west monetary systems.

But others, like security expert Brian Krebs, see the attention as quite possibly just the opposite effect. While outfits like Mt. Gox may take a bath, perhaps even fade away, digital currencies themselves, the peer-to-peer electronic monies, may well thrive.

As he wrote on his blog, Krebs on Security: “Just as the entertainment industry’s crackdown on music file-sharing network Napster in the late 1990s spawned a plethora of decentralized peer-to-peer (P2P) file-sharing networks, the argument goes, so too does the U.S. government’s action against centrally-managed digital currencies herald the ascendancy of P2P currencies.”