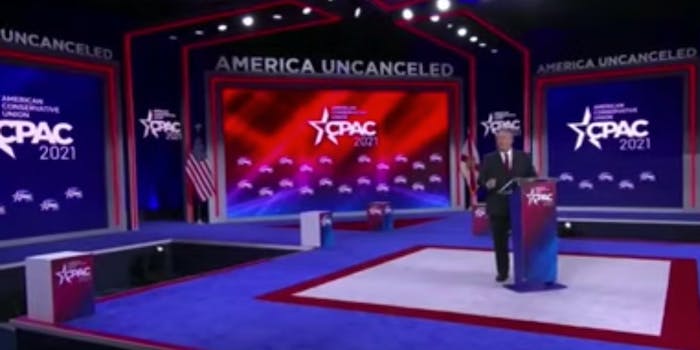 People are comparing the CPAC stage to a Nazi symbol (updated)

'Maybe a coincidence, but white nationalists will see this as yet another overt signal from the GOP.'

Update 9:17am CT, March 3: The design firm behind the stage, Design Foundry, told the Forward that the design resembling a Nazi symbol was purely coincidental.

“[We] had no idea that the design resembled any symbol, nor was there any intention to create something that did,” the company said.

CPAC announced it would not be using the firm going forward.

The Conservative Political Action Conference (CPAC) has been taking place in Florida over the past several days, drawing eyes from across the country as Americans wonder how conservatives plan on moving forward following not only the electoral defeat of Donald Trump but the insurrection for which many still feel Trump and other members of the GOP carry blame.

While there have already been several oddities to come out of CPAC so far, it’s the design of the main stage that has some people particularly on edge.

Once photos came out of the place where prominent Republicans would be speaking at the conference, Twitter users were quick to point out the undeniable similarity in design to that of an Odal rune—a design that was famously co-opted by Nazis in the 1940s and is still used today by some neo-Nazi groups.

While it is, of course, entirely possible that this similarity in design is a mere coincidence, the apparent resurgence of Nazis throughout the United States, and the link they and conservatives both share with the alt-right, has people on edge.

“This is in our face and there is no way that a gathering of white nationalists did not know what this meant,” suggested @ReesusP.

It seems unlikely that there will ever be conclusive proof regarding whether this was done on purpose or by coincidence, Oren Jacobson posited that it ultimately doesn’t matter.

“White nationalists will see this as yet another overt signal from the @GOP,” he wrote, referencing the Proud Boys’ interpretation of Trump’s message to them in 2020 to “stand back and stand by” as instructions to await his signal before unleashing violence.

Some conservatives scoffed at the claims, with perpetual provocateur Jack Posobiec even going so far as to draw versions of the symbol on images of President Joe Biden and Vice President Kamala Harris speaking, clearly attempting to insinuate that the CPAC stage’s resemblance to the Odal rune is imaginary.

However, the resemblance isn’t up for debate, as it’s quite clearly the exact same design as the Nazi symbol. Whether it was an intentional choice by someone behind the scenes at CPAC remains a mystery—and one that certainly isn’t doing anything to decrease sky-high tensions between predominantly white conservatives and Americans who are concerned at just how much Nazi influence may have crept back into society over the past several years.