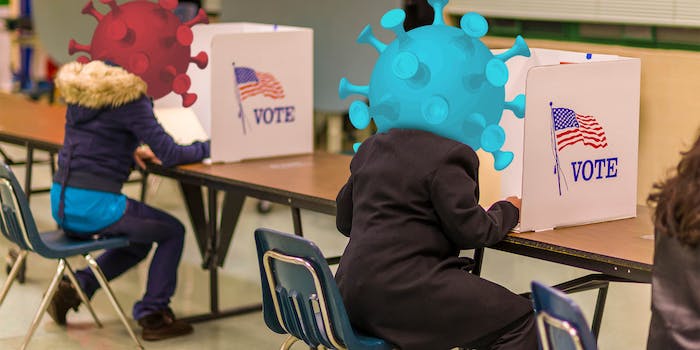 How coronavirus could affect the 2020 election

It's a real concern.

Every single day, the coronavirus outbreak rewrites a little more of the world’s economic and cultural outlook. In the United States, this has included mass closures of schools and businesses, the suspension of every major sports league, and enormous financial peril for many Americans.

The first inkling that the election might have its trajectory altered came on March 10, as both former Vice President Joe Biden and Sen. Bernie Sanders (I-Vt.) announced that they’d be canceling post-primary rallies due to concerns over crowd safety—a stance President Donald Trump took as well.

That same day, the Democratic National Committee announced that the debate between the two remaining candidates would be moved to a CNN studio and held without an audience, for the safety of everyone involved.

Since then, everyone from top pundits to anonymous social media users have speculated how else the 2020 election could change from coronavirus.

There have already been multiple primary elections moved, and influential Biden supporter Rep. James Clyburn (D-S.C.) called for the entire Democratic primary schedule to be “shut down” once Biden becomes the prohibitive favorite.

Would the candidates be able to campaign? Would Trump even attempt the unthinkable and try to cancel or indefinitely postpone the election in the guise of the national emergency he declared?

Here are some of the ways the COVID-19 outbreak has changed the course of the election—and some other potential hypothetical ways.

States move or postpone primaries: This process has already started. On Mar. 13, Louisiana moved its primary election from April 4 to June, with Georgia’s moving two months back soon after. The most immediate primaries, scheduled for March 17, were especially thrown for a loop—Ohio quickly postponed its primary for two months, while Florida, Illinois, and Arizona went ahead with plans to hold their elections, since all three had already started early voting. Other than Puerto Rico on March 29, there are no more in-person primaries scheduled until Apr. 4, and so far, six states have moved their elections overall.

With Biden having such a strong lead in the Democratic primary, this might not change the course of the presidential election much. Biden won all three elections on the 17th, and Ohio is polling for Biden by two-to-one. But if the Democratic primary fizzles out in a haze of postponed or canceled state elections, there will be something for disgruntled Sanders supporters to latch on to as proof that another election was “rigged” against them.

Will it affect their support of Biden? Potentially.

Canceled rallies: There are currently no presidential rallies or campaign events on any candidate’s schedule. Even Trump, who initially resisted canceling any of his rallies, has nothing planned for the near future. Nobody seems to know when rallies might start up again, though Trump’s campaign has talked of holding “virtual events with top surrogates” at some point.

With Trump doing the majority of his in-person campaigning through rallies, this could wind up being a major blow to his re-election chances.

Expanded voting by mail: There is evidence that Iran downplayed the initial impact of coronavirus so as to not impact turnout in an upcoming election—with the election providing an opportunity for the virus to spread. So taking into account the danger of crowds gathering and spreading coronavirus, a number of states are exploring quickly sending mail-in ballots to most or voters.

According to NPR, it takes about 20-30 days to print out and mail enough ballots to send to an entire state’s voting base. In the meantime, with primaries on March 17, Arizona and Florida worked overtime to push early and mail voting and other states with elections in April were looking at increasing mail-in voting as well. Again, with Biden expanding his lead, there’s not as much urgency for this with the Democratic primary. But if the pandemic continues, expect more states to explore expanded mail-in and early voting for November.

Will this change the course of the election? It’s not clear. In 2016, early in-person voting tended to favor Democrats, while mail-in voting favored Republicans.

Low turnout: Before the March 17 primaries, turnout in Democratic primaries was generally up, with several states seeing massive turnout bumps, particularly Virginia and Texas. But that changed at least somewhat on Tuesday. While Florida and Arizona saw turnout on pace with 2016 due to early voting and mail-in ballots, Illinois had extremely low turnout and major problems keeping polling places running.

If the pandemic continues, look for more states to follow the Florida and Arizona models in order to keep their turnout up. Generally speaking, there’s no hard-and-fast pattern as to which party benefits from low turnout, but Democrats generally tend to do better when more people vote.

One of the candidates becomes infected: This is entirely theoretical, of course. But Donald Trump, Joe Biden, and Bernie Sanders are all in their 70s, which is the age cohort that’s been hit the hardest by COVID-19. Trump has already been exposed to the virus several times and has tested negative. Likewise, Vice President Pence has also been exposed.

Since the pandemic went national, Trump and Pence have made appearances at the White House (not practicing social distancing), while Sanders has been on the Senate floor, and Biden has mostly gone into lockdown after a speech on Mar. 13. A number of prominent politicians have either tested positive or had to quarantine—so it’s not out of the realm of possibility that one of them could contract it.

If the unthinkable were to happen and one of the major nominees were to become ill with coronavirus and die before the election, the right to choose a new candidate would fall to the respective party’s national committee through either a second convention or an election held by committee members. This has never happened in American history, though there were plenty of rumors that Trump was on the verge of being replaced by Pence as the Republican nominee shortly after the Access Hollywood tape went public. If the election winner were to die before inauguration, the 20th Amendment dictates that the Vice President be inaugurated as the president.

Trump tries to cancel the election: The truly unthinkable outcome of the pandemic would be Trump using it as an excuse to either cancel or indefinitely postpone the 2020 election under the guise of the ongoing national emergency.

These rumors surfaced before the 2018 midterms, yet came to nothing. And it’s more than likely that they’ll come to nothing again, for the same reason: Trump has no power over state elections. No president does. Each state has its own procedures for administering their elections, which are technically not held to determine the president, but to choose a slate of electors to choose the president. These electors, usually prominent people in the state party, are either nominated by state parties or by primary voters.

The vote held by Electoral College electors is held simultaneously in every state capital on the Monday after the second Wednesday in December—giving Trump no real opportunity to interfere in it.

Beyond that, an 1845 law codified the date of the presidential election, and the 20th Amendment locks down the swearing-in dates of both Congress (Jan. 3) and the president and vice president (Jan. 20.) Article I of the Constitution also sets down how members of Congress are elected and the executive branch has no role in this process, either.

Changing any of these procedures would require either sweeping new laws passed by a Democratic-controlled House, new emergency powers given to the president by Congress, or another Constitutional amendment to overwrite all of the applicable sections of the Constitution. And while numerous states either already have or are discussing moving their primary elections, these will still take place at some point down the road, and these are decisions being made at the appropriate level, by state officials, not the White House.

Were Trump to attempt to postpone the election through executive orders or tweets, it would require thousands of officials at the state and local level going along with a completely toothless order.

Trump would also likely require military intervention to enforce the orders—and the use of military forces to enforce civilian law is also against federal law. His term will end on Jan. 20 at noon in Washington, and if no new president has been chosen by the Electoral College, then Section 3 of the 20th Amendment authorizes Congress to determine who should be acting president.

However, there’s one loophole that Trump could theoretically exploit to win a second term without an actual election: he could ask state legislatures to disregard their state elections and award their Electoral College votes to him. The constitution doesn’t set out the particulars by which electors are chosen, merely saying in Article 2, Section 1 that “Each State shall appoint, in such Manner as the Legislature thereof may direct, a Number of Electors” for president.

While the states now uniformly have a popular vote to choose a slate of electors, America’s early electoral history saw a mix of states holding a popular vote, or having electors appointed by state legislatures. That practice fell out of favor by the early 1800s, and ended entirely by 1864, with South Carolina as the last holdout.

But it could theoretically come back. According to a recent article by Slate exploring this loophole, Supreme Court decisions have reaffirmed that state legislatures could theoretically just pick their own electors and ignore the results of a state vote.

In theory, Trump could ask all states with a Republican-controlled legislature to cancel their elections (or disregard the results of those elections) and appoint their own electors—ones that will vote for him. Doing so would be a coup unlike anything in American history—and it relies on enough state legislatures actually listening to him to get him to 270 Electoral votes. Trump would need almost every state with a Republican legislature to fall in line, and almost every elected official of any importance in these states to do so as well. He’d almost certainly need a large military intervention to make this happen, as well.

Without trying to actually cancel the election, Trump could also, at least in theory, order Republican state governors to do for the general election what Ohio’s governor did for the primary: postpone them. But there’s no legal requirement for them to comply, and it would merely kick the election back to Congress after Jan. 20 comes and goes with no new president.

This isn’t to say Trump might not make attempts to depress voter turnout or de-legitimize the outcome, particularly if the pandemic is still going by November. There are any number of ways Trump can try to get people not to vote or scare them into voting for him. There are also many ways for state officials to use their emergency powers to obstruct or block voting, But unless the military abandons its oath in mass numbers and dozens of state legislatures suddenly embrace dictatorship, none of it is likely to end with Trump in office without an election.

No matter how much both Trump and coronavirus are rewriting our country, they haven’t quite gone that far.