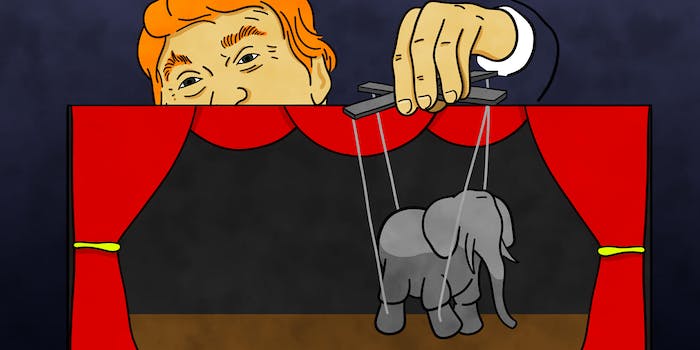 On Tuesday morning, President Donald Trump tweeted what seemed to finally be his acceptance of the intelligence community’s finding that Russia will interfere in the 2018 midterms—on the side of Democrats.

I’m very concerned that Russia will be fighting very hard to have an impact on the upcoming Election. Based on the fact that no President has been tougher on Russia than me, they will be pushing very hard for the Democrats. They definitely don’t want Trump!

The tweet was mostly written off as either gaslighting or some kind of misfired attempt at trolling by the president.

But quite a few people on social media had a more pressing concern, and it’s one that liberals have been expressing for a while. They believe that the tweet was foreshadowing the president attempting to interfere in the upcoming election, either by postponing it, canceling it completely, or somehow invalidating the results—due to the specter of Russian interference or something else.

Y'all understand that this Tweet is specifically setting up questioning of the validity of election results if Democrats take bake the Congress, right?

It's all on the table now, folks.

They are coming for our country.

Polling for the 2018 election shows Democrats holding a large lead in generic ballot surveys. And midterm elections usually swing toward the party that’s not in the White House.

So is it possible that Trump wants Russia to repeat its efforts from 2016 as a pretense for invalidating a Democratic victory? Or to just cancel the whole thing entirely?

Can he actually do that?

While it’s almost certain that Russia will attempt to interfere in the election in some way, Trump does not have the authority to either cancel the election or invalidate its results. The election of 2018 will go forward, and the winners will be seated.

His statement is pure propaganda. To state that he’s “concerned” Russians will hack upcoming elections, but then insert the lie of their preferences for Dems, is him spreading disinformation to his base. He is looking to postpone midterms or planning to contest Dem successes.

The reasons for this certainty lie in the separation of powers enshrined in the Constitution, and in the complex web of laws that dictate who governs elections.

Both individual state governments and Congress play various roles in scheduling and carrying out elections, but the executive branch plays no role. In fact, the United States technically has no nationwide elections—only state elections for senators, House members, and a slate of electors for the Electoral College during presidential election years.

Article 1, Section 4 gives state legislatures the task of determining the “Times, Places and Manner of holding Elections for Senators and Representatives,” a task which was made uniform at the general election level by Congress in 1845. Beyond that, Section 5 allows that “each House shall be the Judge of the Elections, Returns and Qualifications of its own Members.”

A 2004 report by the Congressional Research Service, prepared in anticipation of a possible terrorist attack around the time of the 2004 presidential election, found as much.

“The United States Constitution does not provide in express language any current authority for a federal official or institution to ‘postpone’ an election for federal office,” the report found, with additional finding that even if an attack or other unforeseen event took place that necessitated moving the date of an election, it would fall to Congress to make the select the date, and the states to carry out the new election.

Oh god, I just realized what’s happening with this tweet.

Everyone, incl. Trump & Putin, knows that Democrats will sweep the midterms.

Russia WILL interfere with the election in a publicly pro-Democrat way, so that Trump will be able to say “See?”, then invalidate the results. pic.twitter.com/fnFNjdOjhb

A second Congressional Research Service report, specifically about the Executive branch’s theoretical power to postpone or cancel an election, has the same finding.

“The Executive Branch does not appear to currently have the authority to establish or postpone the dates of elections at either the federal or state level in the event of an emergency situation,” it finds, reaffirming that Congressional elections are entirely the purview of Congress and the states.

As for the validation of such an election, again, the White House has no role in certifying or declaring winners. Congressional elections are administered by state election boards, certified by each state’s Secretary of State, and Congress itself seats its members every two years.

Nothing stops that process, no matter who or what tries to interfere. A perfect example of that could be found in December 2017 in Alabama, when Democrat Doug Jones beat Roy Moore in that state’s special election for Senate, and was certified and seated, despite Moore never actually conceding. It didn’t matter that he never conceded, the state declared that he lost.

As federal law stands, Donald Trump simply doesn’t have the constitutional authority to cancel the midterms via a tweet or executive order, nor does he have the power to make the states comply with such an order. The election would go on just as scheduled, and the president would be exposed as a tyrant flagrantly attempting to violate federal law.

Trump could conceivably try to use emergency presidential powers to postpone or cancel an election, but that power has to be granted by Congress and recognized by a court. To do so without such approval would be an illegal power grab unlike any other in American history, and one that Congress and the states are beyond unlikely to accept.

The United States has never suspended, postponed, canceled, or invalidated an election at the federal level. Even during the Civil War, both the 1862 midterms and 1864 presidential elections were held without incident.

While Lincoln was nervous about his victory, he held firm to the idea that the election had to take place, declaring after his victory that “the election was a necessity. We cannot have free Government without elections, and if the rebellion could force us to forego or postpone a national election, it might fairly claim to have already conquered and ruined us.”

And while the U.K. suspended local and general elections during World War II, the United States continued as normal, with Franklin Roosevelt simultaneously running the war effort and for re-election in 1944.

That’s not to say elections have never been postponed at the state level. After September 11, 2001, New York postponed or canceled the vast majority of its primary elections under the authority of the state’s governor and local officials. But they were eventually held without incident.

There were rumblings that President Barack Obama might suspend some or all of the federal elections in 2012 due to the damage that Hurricane Sandy caused to the East Coast. In fact, the White House’s inability to answer a question about Obama’s authority to postpone the election led to a flurry of outcries from right-wing media outlets demanding that the election go forward as planned—likely because they thought Mitt Romney was going to beat him.

In the end, Sandy caused no postponement or cancellation of the election, and Obama didn’t need a massive and illegal power grab to ensure a second term in office.

What Trump can do is what he did in 2016—cast doubt on the validity of the results not in an official capacity, but as way to validate the grievances of his followers.

Trump spent the waning months of the 2016 campaign complaining that the election would be “rigged” as an excuse for what he thought was his inevitable loss.

He appears to be doing the same thing now, loudly proclaiming that Russia will interfere as a way of making excuses for what will likely be a poor showing for Republicans in November.

Essentially, as Trump is spinning it, the only way for Republicans to lose is for Russia to interfere.

Trump is seeding the narrative that when the Republicans lose in a landslide in November, the Democrats will have been aided by the deep state and Russia. The regime has been laying the groundwork for this since the inauguration crowd story-an alternative truth for his believers.

But no matter the result, the 2018 election will go forward. The president has no power to stop it, nor does he have the power to block a Democratic majority from being seated if that’s what the voters choose.

As one popular media figure thundered, “in our constitutional system, the president has no say. I hate to tell you this, but the president can’t do a thing about this. The Constitution sets the terms of the election. The states determine where the elections are, the federal government and states together.”

That media figure was Rush Limbaugh.