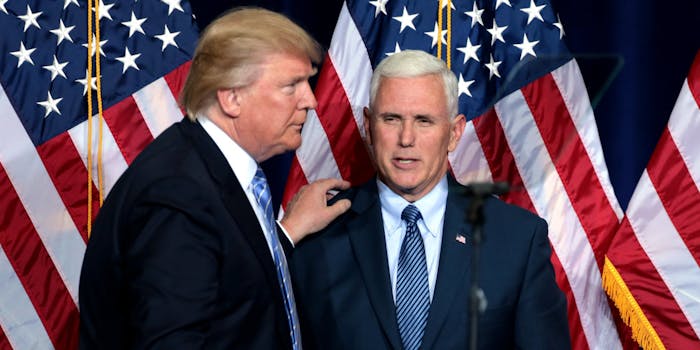 The number of accounts followed by Pence temporarily changed on Wednesday.

Twitter users believe Vice President Mike Pence may have unfollowed President Donald Trump on Wednesday amid the chaos in the nation’s capital. Evidence, unfortunately, is inconclusive.

Pence, who outraged Trump by pouring cold water on conspiracies that he would somehow overturn the election, was forced into hiding after the president’s supporters stormed the U.S. Capitol building.

As police clashed with the president’s followers, one of whom was reportedly shot after attempting to breach the Senate chambers, Pence appeared to unfollow Trump on his personal Twitter account.

Analysis by the Daily Dot of Pence’s personal account, which follows 47 people, showed that the vice president was not following Trump.

Moments later, however, Pence’s account was shown to be following Trump. The number of people Pence follows also changed to 48.

A look through the internet archive shows that Pence only followed 46 accounts on Jan. 1 of this year. It’s unclear if Pence followed Trump at the time. Pence also appears to have followed 47 people on Tuesday.

The Daily Dot reached out to Twitter to ask whether Pence had actually unfollowed Trump or if a glitch caused an issue with his account.

Uncertainty over the alleged incident has since been rampant online, with users questioning what actually took place.

Others thought Trump may have soft blocked him, a trick known to the extremely online as a secret way to remove a follower.