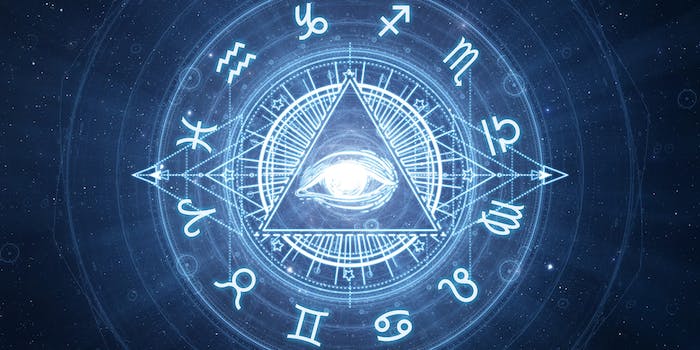 The Zodiac signs as conspiracy theories

Are conspiracy theories just astrology for dudes? It’s a question that came up recently, while musing over the ludicrous allure of QAnon.

The question has also been posed on Twitter by comedian Cathy Heller.

As the Daily Dot’s resident astrologer, I’ll say this: Whatever your gender, we all need something to believe in.

Both astrology and conspiracy theories rely on specific observable details—like planetary movements or factoids from sensational news stories—to extrapolate a greater “truth.” The same reasons some dudes gawk at astrology are the exact reasons why conspiracy theories feel so absurd to non-believers: in order to believe in either, you have to allow for some suspension of disbelief.

You could also say the opposite is true. We love to pore over birth charts and detailed monthly astrology forecasts for the same reasons that we get consumed with deep dives of conspiracy theories: we love to make sense of the tough-to-explain parts of our lives.

So whether you’re a white dude who hates astrology, a recovering zodiac-memes addict, or simply a non-binary with a love for falling down Wikipedia holes, I’ve created a new zodiac for you. What follows is a conspiracy theory for every sign, and a sign for every conspiracy theory.

Read on, but only if you’re ready for the truth.

The Signs as Conspiracy Theories

You are a mover and a shaker! You love to stay active, whether you’re going for a morning run or boarding a plane with a level to prove it doesn’t move, you’re always on the go! You’ve got a child-like sense of wonder. Isn’t it amazing how the horizon goes on for miles and miles and looks so straight? You’ve also got a knack for leadership! You’ll speak about your mission to whoever will listen. You’ll start a YouTube channel.

Heck you’ll organize an annual International Conference just to share your message with the world.

Taurus: The Denver airport is a secret apocalypse bunker

You’re practical and reliable with an artsy side. You don’t just have one story about oddities—you’ve got several. Whether it’s a creepy horse sculpture, insane apocalyptic art, or rumors of underground baggage tunnels that are really bunkers for the apocalypse, you will slowly and diligently amass your theory piece-by-piece. You never rush, so those who hunker down to listen to your tale had better pack a snack. This…could take a while.

Gemini: John Travolta is a lizard

You love duality. Nothing makes you happier than everything being two things at once! Lizard people light you up. Who cares if there’s no logic to it? It’s fun and fun is what you’re all about! You love to fire off jokes at parties and pointing out the similarities between celebrity face structures and lizard memes tickles your brain. You can often be found by the punchbowl, riffing on your theories and punctuating your one-liners with finger guns. You make finger guns too much. Please stop making finger guns.

Cancer: Chemtrails are poisoning us from above

You’re a nurturer at heart. You love to take care of your loved ones and feed them fresh, home-cooked meals. You also love to freak yourself out. Sometimes things just feel a bit “off” and you’re convinced that something must be to blame. So you look to the skies. Oh hmmm that smoke coming off that jet definitely looks suspicious. And ouch your throat hurts. Ugh do you have a rash? Better search a forum for your symptoms and see if others have noticed that this weird tickle in your throat happens every time a jet flies by. Some say you’re playing the victim but you are doing it for the children! If you don’t think of them, who will?!?

You’re dramatic as hell. You’ve got the energy to do a power hour of beer shots or to spin a hell of a tale. Some would say you are the life of the party, but you have a tendency to go overboard. A little juicy gossip is fun! And embellishing it can make it even more scintillating. But in some cases, like falsely claiming that John Podesta’s emails contained evidence of a child sex-trafficking ring run via a network of D.C. pizzerias, can lead to actual harm! Let’s not forget that a North Carolina man got so riled up that he literally traveled to D.C. and fired a rifle in Comet Ping Pong! You may believe you’ve got a heart of gold, but you’ve got to be careful with your fiery side or it can lead to real damage!

Virgo: The moon landing was fake

You’re a perfectionist with an eye for details. You love to polish and improve things, and you’re obsessed with finding flaws, whether they be your own, your best friend’s, or the quality of footprints left in moondust. You swear that your high standards are in everyone’s best interests, but let’s be honest—you love to nitpick! You’ll spend hours rewatching footage and scanning it for too little or too much wind, or suspect lighting. Heck, you’ll even meticulously research the science behind how well film holds up in space, all so you can prove that you’re never ever wrong.

Libra: The Illuminati (including Jay-Z and Beyoncé) secretly run the world

You live for luxury and glamour, but above all love! And what could be more romantic than a society formed in the late 18th century that continues to exist! Add two superstars in love running the world in secret and you are sold! You don’t need much evidence. The furs, the diamonds, the yachts all of it looks great to you, and it looks even better to imagine it dripping with unparalleled levels of power. Who cares about how it actually works! That said, you do need a lot of reassurance. That’s why you text your boo, your crush, and your bestie on the daily with screenshots of Beyoncé giving what you swear must be an Illuminati symbol to her many adoring fans.

Scorpio: The Sandy Hook shooting was a hoax

You trust no one. Not even grieving parents who’ve lost their children in the most shocking and awful way possible. You’ve got an incredible threshold for pain so you don’t mind replaying videos of their grief over and over to scan them for signs of phony emotion. Some may say you’re too dark, that your heart is twisted and cruel. But you couldn’t care less. No one’s pulling a fast one on you. Not even parents who are rallying for gun control to prevent another senseless tragedy. If you’ve hurt anyone’s feelings in your quest for the truth, you can’t be bothered. Life’s harsh and you’re not here to protect anyone but yourself!

You’re funny and good-natured but sometimes you’re… a bit too blunt. Sometimes what you think is a good time is actually stomping all over something people really love. But you feel you’re just pointing out the obvious! Like Stevie Wonder steadying a mic stand, or turning to a guest who got up to sing with him on Oprah and offering him a one-armed hug! Nevermind the fact that these are things blind people are totally capable of doing, you’ve got tunnel vision baby! You will take your theory and run with it, with enthusiasm, until the rainbow burns the stars out in the sky, always!

You value hard work that leads to high achievements, especially if those achievements are backed up by awards or money! That’s why you simply cannot believe icons like Elvis or Tupac are dead! Come on, how can someone with all those achievements experience an early death? In your view, that’s way too wasteful. You much prefer the idea that they made some wise investments so that they could enjoy an early retirement in solitude on a private island, surrounded by wealth and unbothered by the glare of the spotlight. I mean, who doesn’t want to count their money and achievements in peace and quiet?

You are quite the brainiac. You’re capable of following elaborate reasoning and you’re often are able to convince others that you’re right simply by exhausting them! You can literally go on and on about your theories for hours. Whether you’re going on about Tower 7’s delayed collapse in painstaking detail, or critiquing the way the debris was collected and melted down instead of being investigated for signs architectural integrity, you never seem to run out of steam! One thing you don’t have time for is emotions. You could care less if your theories offend those who lost loved ones, because, in your opinion, nothing is more valuable than the cold hard truth. You can be pretty convincing and you’ve won over some devoted followers like gorgeous French actress Marion Cotillard! But don’t let it go to your head—you still get on most people’s nerves!

You’re an escapist. You’d rather zone out in the bath, or lose yourself in a haze of weed and wine than deal with reality. So it’s no wonder you’re willing to dive deep on the idea that water is turning the frogs gay. You would research the science behind it but you are probably too high to do so and/or having a nap. You’re murky on the details. Generally speaking, you’re driven by envisioning all the possibilities. What if the frogs turning gay is a good thing? What if love is love is love?