No matter how often it is debunked, people want to believe. While many conspiracy theories have their origins in political events, acts of war, or great crimes, others are purely pop culture inventions. They arise from viral stars or YouTube creators, and find millions of watchers who have been conditioned to believe things without proof.

The “Chuck E. Cheese recycles pizza conspiracy” is a perfect example of this, starting with a single YouTube video, which exploded to the point of international coverage. 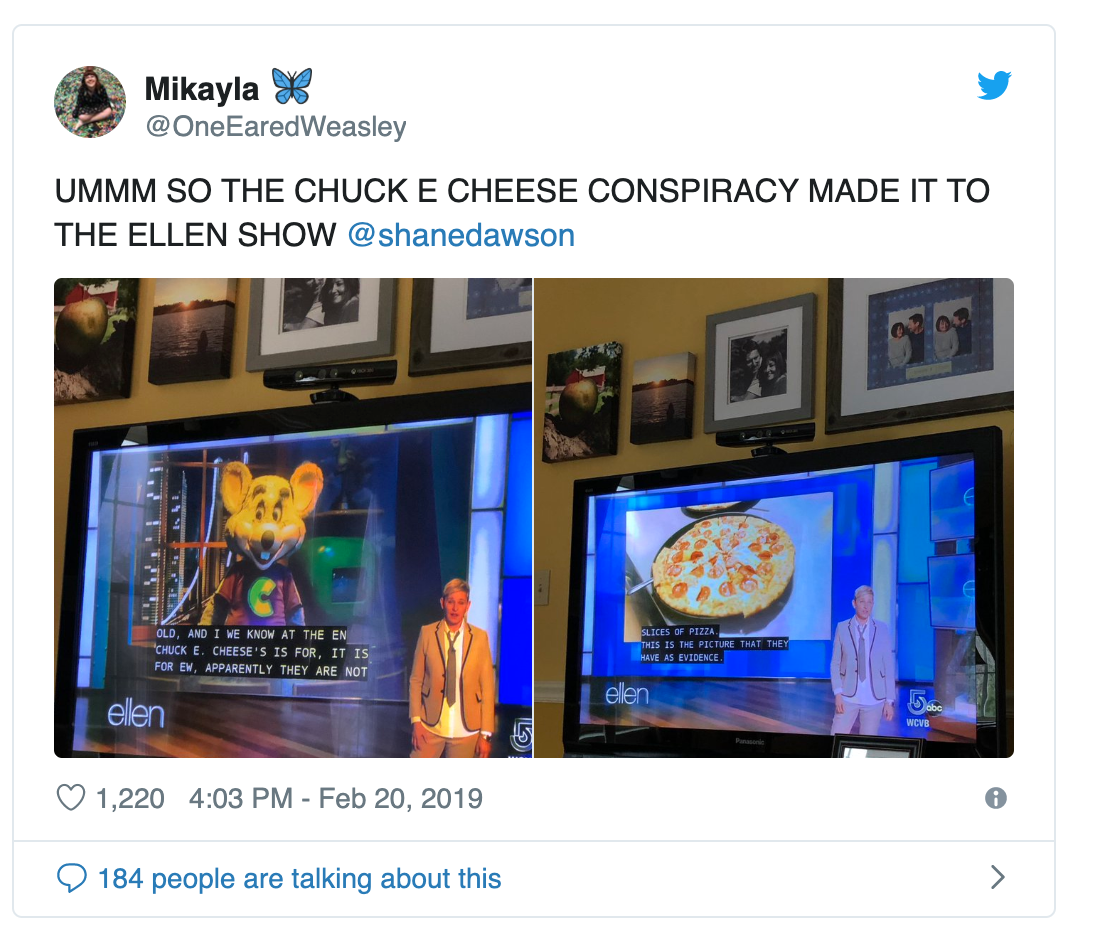 What is the Chuck E. Cheese recycles pizza conspiracy theory?

The Chuck E. Cheese conspiracy theory posits that the pizza and kids’ entertainment giant saves money by assembling uneaten slices from ordered pizzas into new pizzas, and passes them off as just-baked.

One pie, a half-pepperoni half-cheese pizza, appeared to be two halves of different pizzas served together. Dawson and several friends were visibly shocked at the discrepancies, and even measured the pizzas to confirm their theory that the slices were “irregular.”

my new favorite new conspiracy theory is that Chuck E. Cheese takes the pizza that ppl don’t finish back to the kitchen, reheats it, and re-serves it to a new customer which is why the slices are often different sizes in the same pizza pic.twitter.com/wX7GmFgwoi

Sure enough, the slices were the same size, but not in a perfect circle, sending the group into a flurry of conspiracy ideation. Dawson speculated that there was a reason, but that “legally I’m not going to say what I think the reason is.”

How popular did the conspiracy get?

Very, at least for a few days.

Dawson’s followers ate the theory up, and the video he made has nearly 35 million views. It also spawned dozens of mainstream pieces, with everyone from the Washington Post and BuzzFeed to the Today Show and Fox News recycling the same scant conspiracy theory into articles and segments.

Was Shane Dawson the first to claim Chuck E. Cheese pizzas are irregular?

The claims have actually been around for over a decade.

Multiple Yahoo Answers threads ask the question “Does Chuck E. Cheese recycle pizzas?” The answer is always no, because it would be a health code violation, and be terrible press if it ever came out. Dawson’s video was the first mainstream exposure it got, though.

According to employees, no. Many employees went on social media and denied ever recycling or being told to recycle pizza slices. The irregular shapes, they claimed, were because the pizzas would sometimes warp or shrink in the oven.

Beyond that, the cutting tool used to make the slices sometimes didn’t go all the way through and had to be used multiple times on the same slice. Finally, the pizzas are brought out by hand and are knocked around in transit.

What did Chuck E. Cheese have to say about it?

The pizza giant issued a blanket statement saying: “The claims made in this video about Chuck E. Cheese’s and our pizza are unequivocally false. No conspiracies here—our pizzas are made to order and we prepare our dough fresh in restaurant, which means that they’re not always perfectly uniform in shape, but always delicious.”

This isn’t related to Pizzagate, is it?

The Chuck E. Cheese conspiracy theory is about pizza, but it is not related to the “pizzagate” conspiracy theory that political elites are trafficking children for sex by using the non-existent basement of a Washington, D.C., pizza restaurant.

It is also not related to conspiracy theories that Little Caesars actually serves unfrozen DiGiorno pizzas, or that Papa John’s Pizza’s founder was ousted by his own board.

A viral video from 2018 caught a bunch of frozen pizzas in a shopping cart next to a Little Caesars located in a K-Mart. The company said they’d merely been moved before being disposed of, since they’d hit their expiration date.