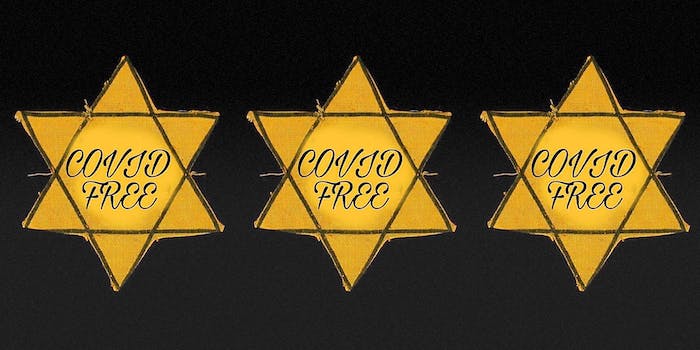 This week, the Washington Post revealed that President Joe Biden’s administration is working on “vaccine passports,” proof that vaccinated people can use to show they are not a risk of contracting or spreading coronavirus after being inoculated.

It’s likely they will be available on smartphones and printable cards.

But even after a year of pandemic-related closures and lockdowns, prominent conservatives related the proposed “vaccine passports” to the Holocaust.

That’s not hyperbole. Some tweeted that the government asking for proof you couldn’t spread a deadly disease is the same as the government rounding up and slaughtering citizens.

The Kentucky Libertarians party helped kick off the movement by asking, “Are the vaccine passports going to be yellow, shaped like a star, and sewn on our clothes?” The tweet compared the documentation to the Star of David that Jews were forced to wear in Nazi Germany.

The party wasn’t alone. Former President Donald Trump’s former Director of National Intelligence Richard Grenell—who once said nothing should ever be compared to the Holocaust—compared proof of vaccination to the Holocaust with a meme from Inglorious Basterds.

Rep. Marjorie Taylor Greene (R-Ga.), never one to pass up the chance to say something both asinine and bombastic, called it “Biden’s mark of the Beast,” comparing it to the end of days.

But the outrage is just posturing. Many noted that international travel to a number of countries requires proof of vaccination, and children are still required to get a slate of vaccines before starting public school.

There are always concerns of the government overstepping its boundary, but implementing measures meant to save as many lives as possible isn’t akin to waging a campaign of murder and terror against an oppressed group.

It’s quite literally the opposite.