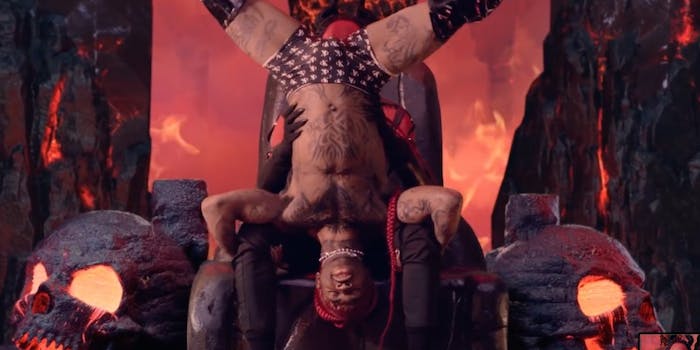 'Conservatives really mad that lil nas x was throwing a** on satan like ronald reagan and rush limbaugh weren't watching from the next room.'

Since the release of the video for Lil Nas X’s “MONTERO (Call Me By Your Name),” conservatives have been in an uproar about the supposedly anti-Christian, Satan-worshipping, gay sex-positive imagery.

Self-directed with Tanu Muino, the rapper told Rolling Stone the song represents a letter to his 14-year-old self, set in a fantasy land of Montero, named after himself (Montero Lamar Hill). Several Lil Nas alter egos go deep into history and mythology in this evolving realm. Events include kissing an alien variant of himself and a lap dance with Satan (even killing him at the end).

Lil Nas certainly understood the controversial terrain he would traverse in creating such a transgressive video. And the foolishness, via comments from conservatives and memes, arrived.

But Lil Nas clapped back with a vengeance by trolling them and also calling out their deep hypocrisy. He tweets on his detractors’ ridiculousness and on describing a music video as devilish while not endlessly excoriating actual events: “Y’all saying a gay [N-word] twerking on a cgi satan is the end of times like slavery and the holocaust didn’t happen.”

Then, he essentially courts someone to make Illuminati videos that include him and his work. “I’m gonna be so pissed if I don’t get any Illuminati conspiracy videos. I worked so hard for this,” he joked.

Some noted that it was clear critics either didn’t understand the video or failed to watch it all the way through.

While Lil Nas is on the outs with conservative and religious gavel-holders, his confidence has made fans of more important people, including his father and Big Sean.