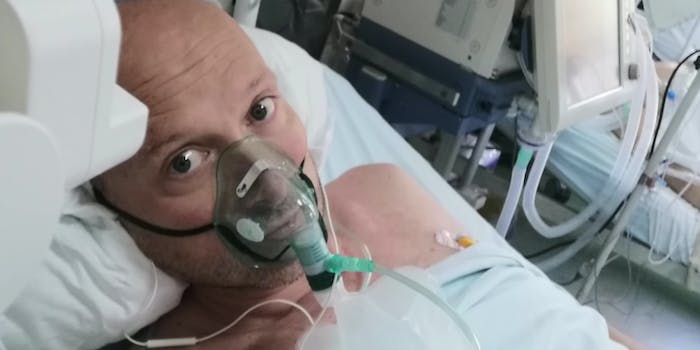 He went offline for a month, then resurfaced to urge fans to not make the same mistakes he did.

YouTuber Bald and Bankrupt was exploring no-lockdown areas just a month ago. Then he disappeared, with no new uploads since May 21. Now he’s back to share his COVID-19 diagnosis and urge fans to not make the same mistakes he did.

In a video, titled “My COVID-19 Nightmare,” Bald and Bankrupt, whose real name is Benjamin Rich, addresses his “disappearance” before detailing into his “hell month.” Even though he’s just sitting in a chair in his hotel room, Rich says he is “out of breath.”

The British YouTuber says he flew to Serbia about a month ago (as many of his subscribers already know) because the country was not in lockdown.

“I was just living a normal life in Serbia,” he says. “I thought it was the perfect place to come and make some videos for you guys. However, I caught coronavirus—my own fault, really. I wasn’t being as safe as I should’ve been. So I’ve got no one to blame, apart from myself.”

The 46-year-old calls not going to a doctor immediately his “biggest mistake.” He cited his young age, “machoness,” and being British as reasons for not seeking help sooner. According to a study, per the Independent, “Two-thirds of Britons would put off going to the doctor over a fear of receiving bad news.”

By the time Rich went to the hospital, 10 days after feeling symptoms, he says he couldn’t walk to the bathroom or breathe. “I was dying basically at home and not realizing it,” he recalls after learning he had no oxygen in his blood and his organs were shutting down.

The travel vlogger says his health only deteriorated after being admitted into a COVID-19 hospital. Rich says, with help from the Russian Embassy, he got moved to the intensive care unit (ICU), where he spent a week. In the ICU, he saw “terrible things,” from a patient being resuscitated and not making it to another’s heartline monitor going flat and their body being subsequently covered in a sheet.

Now that Rich is out of the hospital and recovering, he has a message for viewers: “Please take the disease seriously and don’t make the mistakes I did.”

Rich’s video has since been made private, and some fans are disappointed. “Too bad the video was removed…it was a powerful PSA,” one fan wrote on Reddit, with another saying, “His sharing would/could save countless lives.”

The Daily Dot has reached out to Rich.