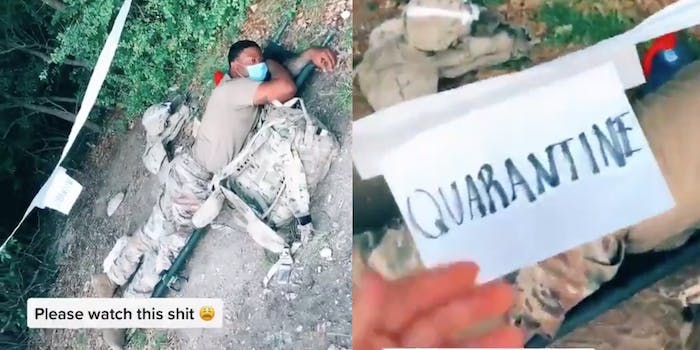 Soldier allegedly ‘exposes’ what getting coronavirus in the military is like—but is it true?

The military is pushing back on the viral video.

A video showing the alleged living conditions of suspected coronavirus patients in the U.S. military is raising questions after going viral online.

Footage originally posted to TikTok shows what appears to be a soldier laying on a cot outside after purportedly experiencing symptoms consistent with COVID-19.

The clip quickly spread across social media, garnering over 3 million views from just one post on Twitter alone.

According to the video’s author, a TikTok user known as “mr.buttersworth69,” soldiers at the Fort Hood military post in Texas are being quarantined in the field for prolonged periods.

“Here’s what we got our boys doing that are on quarantine in the field,” he says. “If you got any symptoms, they don’t send you home or to the hospital; they quarantine you behind some tape, on a cot, with a mask, and a little fucking sign for two damn weeks.”

Users on Twitter expressed shock at the alleged treatment of the country’s armed forces.

“Respect the troops? Not even the military respects the troops,” @TheKing_Duh said.

Not long after going viral, the original TikTok video was removed. As users questioned the video’s legitimacy, mr.buttersworth69 stated in comments on his profile that the video was in fact real but that he “had to take it down.”

But officials at Fort Hood say the video falsely portrays the reality on the ground.

Brautigam added that the soldier seen laying on the cot “was not COVID-19 positive” and had never even been seen “for COVID-19 related symptoms.”

“This does not accurately represent the situation or the care and concern this unit has for the health, welfare, and wellbeing of our Troopers or their families,” Brautigam said.

When asked about Fort Hood’s coronavirus policies, Brautigam pushed back on the video’s claims that quarantined soldiers would be kept outside for an extended period.

“No COVID positive Soldiers will go to the field or remain in the field,” Brautigam said.

If a soldier presents symptoms while in the field, a medical provider will first come to them to determine whether a test is needed.

“If a Trooper requires a test, they will travel to a medical facility for that testing and that crew will quarantine pending the results of the test,” Brautigam said.

Soldiers who do test positive will not remain in the field, Brautigam continued, but will instead be isolated either at home or in the barracks while their units begin contact tracing procedures.