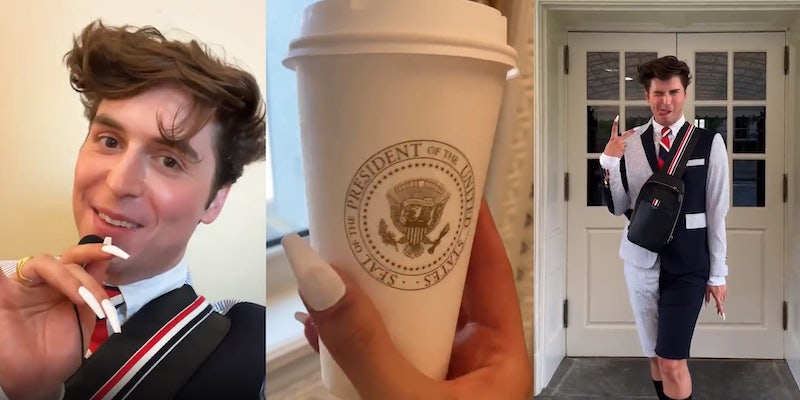 They just don't get it.

As the delta variant of COVID-19 ravages the unvaccinated, efforts to convince people to take the vaccine have increased significantly in recent weeks. Earlier this month, the New York Times reported that the White House, as well as some states, were teaming up with TikTok influencers to promote vaccines.

The video by actor and comedian Benito Skinner, known on social media as Benny Drama, features his “Kooper” the Gen Z intern character working at the White House.

Kooper is the quintessential bumbling, cheerful young intern. In the clip, Skinner zips around the West Wing, scheduling White House Press Secretary Jen Psaki (who appears in the video) an unsolicited nail appointment, drinking coffee, vamping, and being charmingly ridiculous.

“This is actually the entrance to the West Wing. It’s so fun and it’s really prestigious,” Skinner chirps at one point. In another segment, he asks if Olivia Rodrigo is still there. “No,” Psaki replies sternly.

While Skinner cavorts and gossips on the phone, Psaki stays focused on developing a communications strategy to encourage people to get vaccinated.

After some mishaps and tomfoolery, her “intern” follows her example. The video ends with Skinner on the phone explaining how important it is to get shots in arms as Psaki nods approvingly.

From the moment the video dropped on Monday, Republicans started freaking out on social media.

The same folks who had no problem with President Joe Biden’s predecessor using the White House for COVID-19 super spreader events seem to take issue with the current administration trying to convince young people to get vaccinated by enlisting the (reportedly pro bono) help of a rising young influencer.

In a tweet on Monday, Donald Trump Jr. suggested watching the video was worse than waterboarding.

Other reactions smacked of homophobia. One person said that because the video appealed to LGBTQ people, it would dissuade straight people from getting vaccinated.

But the collective freak out among conservatives was vast.

“I was going to get the vaccine but this changed my mind,” another Twitter user commented.

While conservatives might not approve, many people found Skinner’s video a delightful, savvy form of outreach, and were exasperated by the right wing’s humorlessness and vitriol.

“I love this so much! Best thing I’ve seen in a while in American politics!” tweeted @KristaBaca1.

Skinner’s TikTok has 3 million views as of this writing.