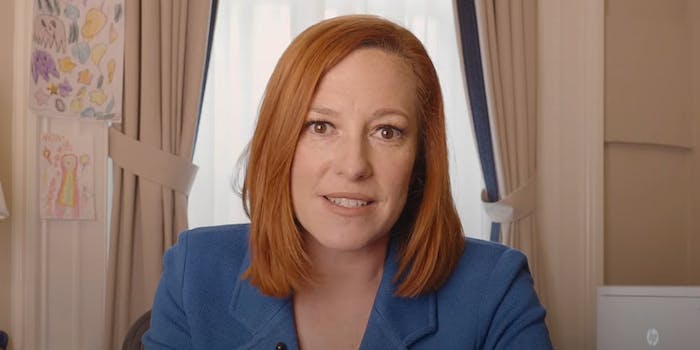 Who are these Twitter weirdos crushed that Jen Psaki is leaving the White House?

Why would you be upset about this?

Where were you when you heard the news? Standing at the kitchen sink and suddenly so unsteady you needed to walk over to a stool? Driving to work and instantly pulling over because the lane lines looked wobbly through your misty eyes? Did you walk straight to your underwear drawer and fish for your revolver, buried deep in the back, and start spinning the cylinder, just to feel something?

In an interview with CNN’s David Axelrod, Psaki said she had always discussed serving just one year, and that she was sticking to that plan.

That’s pretty standard. Former President Donald Trump cycled through four press secretary in his four years, and prior to him, former President Barack Obama went through three during his eight years in office.

And yet, online, some people, who have grown to love Psaki were devastated to learn of Psaki’s departure.

One called her “literally one of the best destroyers of bullshit I’ve ever seen.”

It’s true that Trump’s tenure made White House press secretaries infamous for their theatrics and obfuscation. And if you found Trump’s press secretaries to be frenetic and full of it, Psaki, merely by representing the party you like, felt like some great return to sanity.

And Psaki developed a cult following for people who relished her occasionally wry responses to Fox News and other right-wing outlets.

But it’s doesn’t mean you need to cry like the family pet just died. Biden will assuredly replace her with someone just as staid and uncontroversial who you can grow to adore just as much.