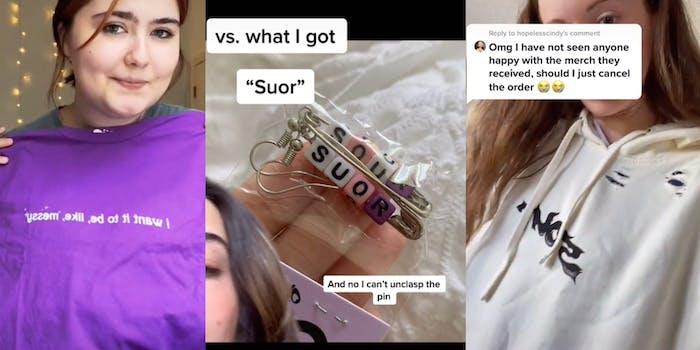 ‘Whoever’s in charge of this website just tricked the masses’: TikTok users criticize Olivia Rodrigo’s merch for being low quality

Some Olivia Rodrigo fans feel the products were misrepresented on the website.

The key word search “Olivia Rodrigo merch” on TikTok brings up a plethora of videos and reviews dating back from when the “Driver’s License” singer first dropped merchandise for her debut album Sour. While many of the reviews from earlier shipments were positive, the most recent round of reviews shows TikTok users criticizing her merch for being low quality. Some say they hate their orders.

TikTok user Dani Smith, who’s known as @fatttbaby on the platform, posted her review of the merch, comparing what’s advertised on Rodrigo’s website versus what she actually received in the mail.

Smith ordered the “Sour Butterfly Hoodie,” an off-white, heavyweight fleece pullover hoodie. She expected it to be short and wide, as it appears on the merch website, but the hoodie arrived long and skinny, like it was meant to be oversized and baggy.

She was also disappointed at how small the graphics were on the hoodie and surprised at the “razor slices” covering it. The hoodie appeared distressed, with small holes scattered across it.

Smith said she waited two months for her hoodie, which cost $60 according to the merch website.

Judging by the comments on Smith’s TikTok, several users are also disappointed with their Sour purchases. One user claimed the safety pin earrings they bought weren’t even spelled correctly—it said “suor” instead of “sour.” They also posted a video of their earrings, showing the typo.

One user commented under Smith’s post, “Omg I have not seen anyone happy with the merch they received, should I just cancel the order.”

In a video reply to the comment, Smith showed them just exactly how “not good” the hoodie was for her.

Describing the hoodie’s details as “cheapy,” Smith said it kind of felt “like Forever 21” quality.

“The distressing is just so hideous,” she said. “I truly would never wear this outside. It feels really thin and cheap.”

TikTok user Katelyn or @behbehgorl also noted the distressing on the hoodie she ordered (the same one as Smith). She said she didn’t know it was going to be distressed when she ordered it because it’s so hard to tell on the website.

Unless you zoom in on the product image on the merch website, it’s hard to tell that the hoodie is distressed. The product description also doesn’t mention any distressing, but it does say, “Product image is a rendering for illustrative purposes. Actual product detailing may show minor variance.” The black version of the hoodie, according to the website and video reviews on TikTok, does not have distressing.

For Katelyn, this “minor variance” wasn’t so minor because she doesn’t like and doesn’t wear distressed clothing.

“Lowkey, I’m not gonna lie, I was kinda upset,” Katelyn said in the video.

Another TikToker, Delaney McCabe or @delaneymccabe, said in a TikTok that she had seen several people upset with their orders because they received items that didn’t look like what they ordered online. And she was no different.

The t-shirt McCabe ordered appears as a soft, lavender colored tee with dark purple lettering on the merch website. The t-shirt she received was a bright, almost neon purple color with white lettering (although, she did order the t-shirt expecting white lettering). A viewer described it as “Barney purple” in a comment.

“I don’t want to be mean at all,” McCabe said. “It’s just, I feel silly. I feel like I’ve been hoodwinked. Whoever’s in charge of this website has just tricked the masses, and I fell victim to it.”

McCabe said she didn’t even want the “Sour” sweatshirt she also had coming in the mail, she just wanted her money back.

The Daily Dot reached out to representatives for Rodrigo for comment.