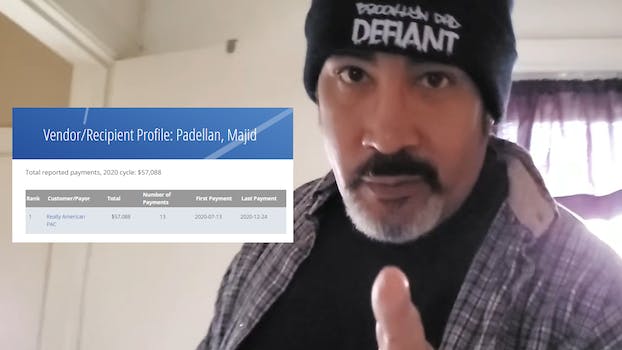 Leftists online think they have proof the viral dad helped torpedo Bernie. But not so fast.

Although he’s always been online, Brooklyn Dad Defiant (Majid Padellan) burst into the national conversation earlier this year when he became dismayed that Pheobe Bridgers decided to smash her guitar while performing on Saturday Night Live.

But for a subset of the extremely politically online, he was already a villain, a centrist liberal who spent the primary attempting to take down Sen. Bernie Sanders (I-Vt.) and had an undying love for President Joe Biden.

His posts are often considered cringe, at one point noting he was excited for First Lady Jill Biden to become America’s “Mommy.”

Leftists have long speculated he was a mainstream Dem operative using his social media platform to attack the movement. And now they think they have proof of it.

But in Brooklyn Dad Defiant’s defense, it’s less damning than they think.

It is a straightforward resistance PAC whose sole message is anti-Donald Trump. And though the founder, Justin Horwitz, claims he helped work with Democratic Socialists in the past, Really America PAC has been criticized for being anti-left. Many flagged the mainstream corporations’ donations the PAC received, including some healthcare organizations deemed oppositional to Medicare for All.

But back to Brooklyn Dad. Throughout the primary, he drew the ire of the left for his centrist takes, which he blasted to his large audience. So the reveal he was a Democratic operative sparked a ton of enthusiasm among progressives, proof there was a coordinated, paid campaign against Sanders as he ran for the 2020 Democratic nomination.

But the reveal he’s being paid by Really American PAC is less of a “got you” than those online think they have.

FEC data shows Padellan’s first payment from Really American PAC came in September 2020, well after the primaries ended. And according to the Internet Archive, in August, Padellan updated his Twitter bio to note that he was working with Really American PAC, around when the payments started.

If he was trying to hide that info, he was being very open about it on Twitter.

There is no FEC data for Padellan from earlier in the primary, so unless at the time he was working off-the-books, he wasn’t a paid mainstream Dem dedicated to taking down Sanders.

However, his work since taking money has been all over the place, equating Jan. 6’s Capitol riots with 9/11 and writing that the Holocaust would have been worse if Hitler had Twitter.