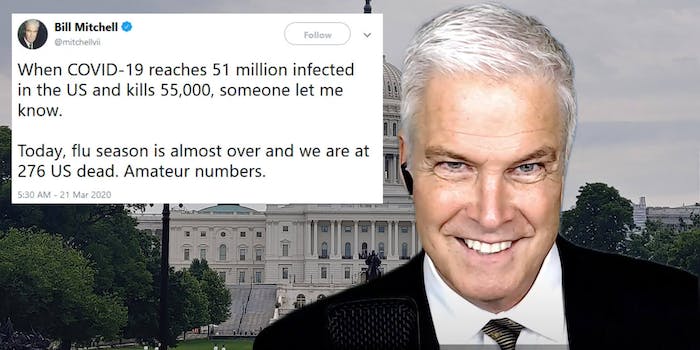 Screenshots have been circulating online showing right-wing commentator Bill Mitchell suggesting that the coronavirus will never kill 55,000 people in the U.S.

Mitchell, a conspiracy theorist and staunch defender of President Donald Trump, has repeatedly attempted to downplay the seriousness of COVID-19.

“When COVID-19 reaches 51 million infected in the US and kills 55,000, someone let me know,” Mitchell said in March. “Today, flu season is almost over and we are at 276 US dead. Amateur numbers.”

Mitchell’s tweet began gaining widespread attention this week once the death toll reached 55,000. As of Saturday, that number shot up even further to well over 65,000.

Twitter users made sure to remind Mitchell of his previous tweet, pointing out that his claim that the death toll would never reach 55,000 was unequivocally false.

Despite the case seemingly being open-and-shut, Mitchell, unsurprisingly, attempted to assert that the death toll was actually inflated.

“I don’t understand. Are you under the delusion that COVID-19 has actually killed 55,000 Americans?” Mitchell asked. “You cannot be that stupid, or maybe you can. The CDC stopped counting ‘flu deaths’ at the beginning of April, 1.5 months early, so they could call them nCOV deaths instead.”

Mitchell’s assertion, of course, is false. The CDC has not stopped counting flu deaths.

The conservative commentator is no stranger to failed predictions. A Twitter account known as “COVID-19 Bad Takes” has even collected the shockingly high number of false claims from Mitchell.