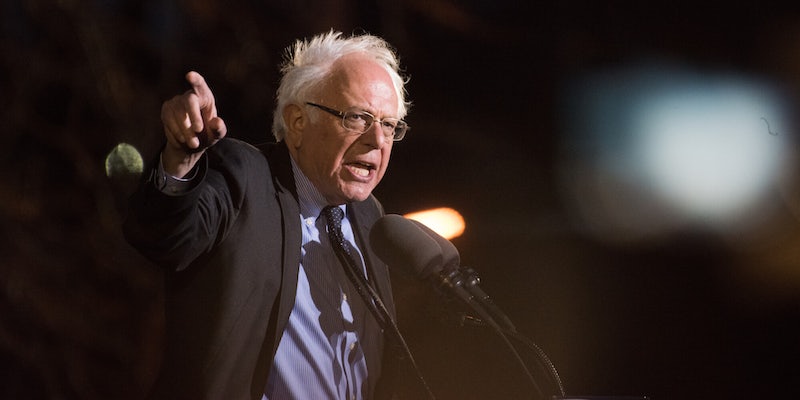 Yesterday night, the Senate passed a relief bill aimed at stalling the economic downturn caused by the coronavirus (COVID-19) pandemic. The $2 trillion emergency relief bill will provide funds for businesses and individuals facing financial devastation due to the self-isolation necessitated by the highly-contagious virus.

In response to the bill’s passage, a new hashtag overtook Twitter, applauding Sen. Bernie Sanders (I-Vt.) for his role in several aspects of the bill.

The trending hashtag, #ThankYouBernie aims to bring attention to the Vermont senator’s role in including a key unemployment proposal in the bill. Sanders threatened to delay the bill if his Republican colleagues didn’t join him in supporting a proposal that would add $600 a week to the country’s unemployment insurance for up to four months. Initially, several key figures opposed the proposal, leaning on the possibility that employers and unemployed Americans might abuse the aid.

In response to Sanders’ passionate defense of the unemployment proposal, people thanked the 78-year-old senator.

“There is no politician in America who fights harder for the working class than Bernie Sanders,” Sanders’ Western press secretary Joe Calvello wrote. “So proud to work for this man.”

In a widely-shared clip of Sanders’ speech from the Senate floor, he defended the proposal and called out politicians for their lack of support. He also called them out for previously voting for “a trillion dollars in tax breaks for billionaires and large profitable corporations.”

People online showed their support for Sanders’ hard work by spreading the clip with messages of encouragement. “#ThankYouBernie for always being on the side of the working class,” one person wrote.

Many people used Sanders’ speech as an opportunity to rally for his presidential bid. His only remaining Democratic opponent, Joe Biden, has thus far racked up 1,215 delegates to Sanders’ 910. Remaining primaries in Indiana, Pennsylvania, and New York, to name a few, could earn Sanders the delegates he needs to win the nomination, but chances are slim. His supporters are hoping the clip will help rally support behind the senator.

Many tweeted messages comparing Sanders to Biden. “With 3.28 million jobless claims and a bailout that’s bigger for corporations than the workers they laid off, Bernie Sanders is on the floor of the Senate fighting for our lives,” one person wrote. “Where’s confused Joe Biden? He’s hiding in his basement. #ThankYouBernie.”

Whether Sanders manages to clinch the Democratic nomination, he has proven to his passionate base why they stood by him.