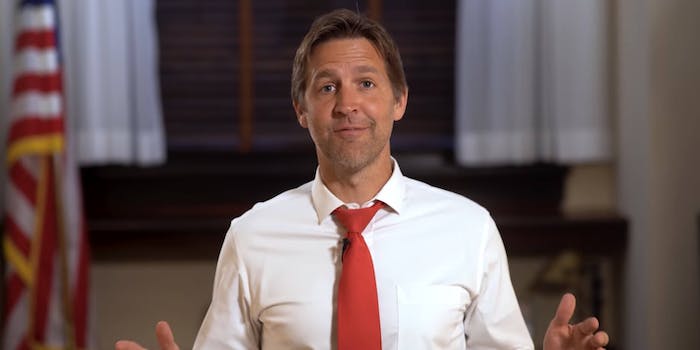 The speech is being universally panned.

Sen. Ben Sasse (R-Neb.) is being criticized for remarks he made in a commencement speech to high schoolers, with some people calling it the “worst graduation speech of all time.”

With schools across the country closed because of the coronavirus pandemic, virtual commencement speeches are being held to mark the end of the school year. Sasse made the speech for Fremont High School in Nebraska on Saturday.

The speech starts off pretty much the way you’d expect—with congratulations to graduates—but it quickly goes off the rails with a number of failed jokes.

Sasse begins by making a joke about adults being proud of the graduates and their “sacrifice” for putting on “something slightly more formal than sweatpants” for the commencement ceremony.

The senator’s speech then pivots to a number of bad attempts at humor, including: mocking the students for being overweight, blaming China for the coronavirus pandemic, and telling people that psychologists are “gainfully employed” because “their job is really just to help people forget high school.”

Murder hornets also made their way into the speech.

The speech was not met well by people online—and even members of the school district.

Fremont school board member Michael Petersen asked Sasse to apologize, saying in a Facebook post that students “deserved better” from the senator, adding: “The racism, implying that our graduates are fat and lazy, disparaging teachers, and attacking the mental health profession are despicable.”

Similarly, the Nebraska Counseling Association criticized the senator’s remarks about the psychology profession and his “alarming lack of sensitivity toward our seniors” by having his speech take “emphasis off the graduates and made it seem as though they have nothing to celebrate or be proud of.”

People online were also bewildered by the speech.

In the speech Sasse said the graduates would remember their high school graduation because of the pandemic—but maybe it will be because of his much-criticized speech?